By Ian Donaldson on 2018-01-15 - Ian estimates he has driven more than 6,000 cars (so far) in a road testing career that's taken him around the world. He has spent several years as a full-time staff motoring editor and is now a busy freelance journalist 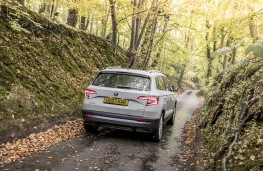 IT'S raining new SUVs in the Volkswagen Group as it rushes to tap the trend for these jacked up estates with looks that promise adventure and a life in the wild.

The latest one wears a Skoda badge on the front and the Karoq name on the boot lid and is the smaller sibling of the Kodiaq SUV launched last year.

It enters a car market where SUV sales are roaring ahead while just about everything else is suffering.

So no wonder it feels like a new VW Group-inspired SUV offering pops up on a monthly basis with a VW, SEAT, Audi or, in this case Skoda name attached.

They share important parts like engines and gearboxes and the expensive to develop platform they all sit on too, leaving it to the stylists to set them apart outside and in. Even then, it can be hard going to guess the precise make you're looking at.

Which means it's a good thing that they all share a modern, finely honed exterior feel and, inside, the VW Group's insistence on a solid, frippery-free approach wins through.

And so to the Skoda Karoq; priced from £20,875 in SE trim with a 115 horsepower 1.0 litre petrol engine, it looks conspicuously good value for a car that's spacious for people and their luggage and decently well equipped.

Stretching to 4,382mm in length and 1,841mm wide it sits in a class of SUV that takes in competitors from outside the VW Group like the Nissan Qashqai and Honda CR-V

The more powerful diesel comes with a four-wheel drive system as standard, while all four engines are available with six-speed manual gearbox or seven-speed DSG automatic transmission, with prices topping out at £31,690 for the Edition 2.0 TDI DSG 4x4.

The core of the Karoq range is expected to centre around the 150 horsepower 1.5 litre petrol engine (from £22,225) with diesels still making an important contribution despite the current wave of distaste for this sort of car.

You can see why diesels will sell too, especially for owners with big mileages to cover where the 61.4mpg official average for the 1.6 diesel compares to the 53.3mpg of the 1.0 litre petrol. Emissions favour the diesel as well, to one one's surprise.

There are three trim levels: SE, SE L and Edition. Standard kit across the range includes alloy wheels, dual zone climate control and front assist that detects a pedestrian in your path and will brake if you don't.

All but the SE have Skoda's Varioflex rear seat system, where the three seats can be moved forward or backwards to increase boot space or rear legroom, or lifted out altogether. It means a luggage capacity of up to 588 litres with the seats in place or a van-like 1,810 litres with them removed. The SE has 521 litres available, or 1,630 with the rear seat folded flat.

Out on a mix of roads the 1.0 litre three-cylinder petrol engine impressed with an eager willingness to move this biggish car along, while riding with gentle precision and not making much noise from engine or road surface. It showed 38.4mpg after a 130 mile drive.

At the other end of the Karoq range, a 2.0 TDI 4x4 managed 43.4mpg and felt more rapid in the higher gears but rode less well and its bigger low profile tyres kicked up a racket on coarsely surfaced roads.

It looks as though Skoda continues to produce cars where the cheaper ones perfectly sum up the brand's fine value for money approach.

IT takes just a few minutes with the Skoda Kodiaq vRS to realise that this car... 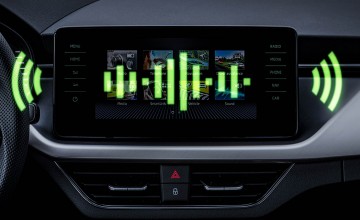