By Maxine Ashford on 2018-01-21 - Maxine has been a journalist since the late 1980s and for the past 13 years has specialised in motoring. Former motoring editor at Media Wales responsible for the Western Mail, South Wales Echo, Wales on Sunday. Freelance since 2009, Maxine loves cars but not quite as much as rugby! 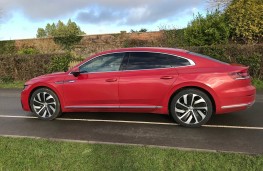 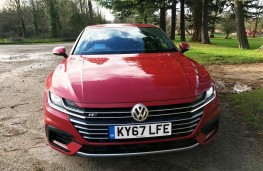 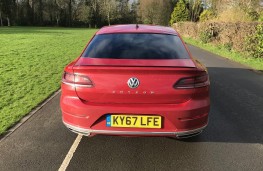 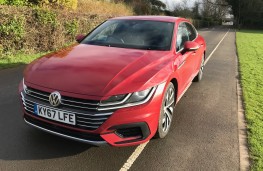 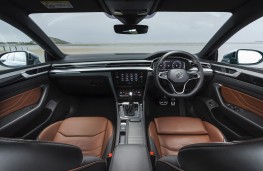 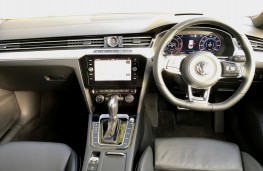 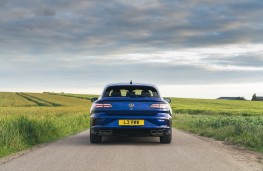 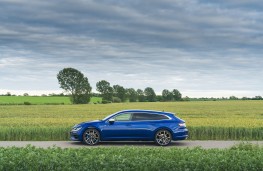 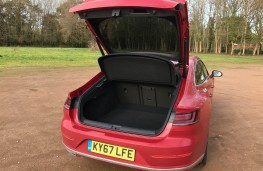 VOLKSWAGEN has an all-new flagship model called the Arteon and with its svelte-like fastback styling and beautiful handling capabilities it could make its mark in the premium market.

The four-door, front-wheel-drive Arteon is priced from £33,505 and is available in two trim levels called Elegance, which is sophisticated, and R-Line which adds an element of sporty prowess to the mix.

Buyers can choose from three punchy engines which are a 2.0-litre 280PS petrol Evo unit and two 2.0-litre TDI diesel engines with outputs of 150PS and 240PS.

An additional three powertrains are due to be introduced a little later down the line.

With its muscular design and coupe fastback styling the Arteon certainly looks the business and other eye catching design cues include a clamshell bonnet, an imposing grille that spreads the width of the car and blends smoothly into the light units, along with an R-Line styling pack that adds special bumpers with C-signature gloss black front air intakes and a gloss black rear tailgate spoiler, tinted glass and lots of R-Line badging. The look is completed by 19-inch alloys.

Move inside the cabin and you will be met by a classy, upmarket interior that oozes style and is packed with technology. There are Nappa leather seats that can be electrically adjusted and the soft touch materials, ambient lighting and brushed aluminium trim is complemented further by piano black decorative inserts on the centre console.

On-board technology includes the likes of an attractive 12.3-inch digital Active Info Display which takes the place of the analogue TFT screen. This new instrumentation looks ultra modern and can be configured to show maps, music, phone contacts or the more conventional speedo and rev counter.

In addition, the Arteon offers full smartphone connectivity through Apple CarPlay or Android Auto, online access via VW's Car-Net system and an 11-speaker plus subwoofer sound system that added Â£1,010 to the price-tag. There is a head-up display, touchscreen, sat nav and plenty more.

When it comes to performance the Arteon is one of the most comfortable cars I have driven in an age.

I know it's aiming to compete with the likes of the Audi A5 Sportback and BMW 4 Series Gran Coupe which are both viewed as premium models, and while the interior may not be quite as fancy, the performance certainly is.

The Arteon feels like it glides across the Tarmac with barely a sound filtering through to the cabin. As it cuts along the country lanes it is beautifully balanced and composed without a hint of body roll.

The road-holding is superb and there is plenty of driver feedback through the precise steering. It's as smooth as they come without spending ridiculous sums of cash.

There are various driving modes called Comfort, Normal, Sport and Individual which alter the car's handling and responses. And Comfort+ and Sport+ modes for even finer tuning.

The fastest Arteon on sale is the 2.0-litre 280ps TSI version which completes the 0-62mph dash in 5.6 seconds and whilst the diesel wasn't quite so quick it was certainly no slouch.

It could reach 62mph from a standing start in a creditable 9.1 seconds, maxed out at 137mph and, according to official figures, delivered combined fuel economy of 62.8mpg with carbon emissions of 116g/km.

Despite its lengthy body measuring almost 4.9 metres, the Arteon is easy to handle and the addition of Park Assist ,which was a £645 optional extra, helped make light work of any parking issues.

Comfort levels within the car are supreme with ample space for back seat passengers, although anyone over six foot may find headroom a little restricted due to the car's sloping roofline.

Storage options are also impressive with a boot capacity that ranges from 563 to 1,557 litres with the 60:40 split-folding rear seats dropped flat.

The Arteon is also packed with a raft of safety features that helped it achieve the maximum five stars in the Euro NCAP safety tests.

All in all, the VW Arteon is quite a car. It looks fabulous thanks to its elegant yet sporty streamlined body, it's packed with innovative technology and it delivers a driving experience that matches its dynamic styling.