By Ian Donaldson on 2018-01-22 - Ian estimates he has driven more than 6,000 cars (so far) in a road testing career that's taken him around the world. He has spent several years as a full-time staff motoring editor and is now a busy freelance journalist

WITH Rolls-Royce and Lamborghini set to launch their first SUVs this year you may correctly deduce that this part of the car market is in fever-sales mode.

Everyone's at it; not least car makers who sell rather more, but rather cheaper models than either of these two luxury transport providers. There's good money to be made if you get it right.

So say hello to the new SEAT Arona, latest SUV from the Spanish arm of the VW Group empire and a rival for established favourites like Mini Countryman, Nissan Juke and newer arrivals in the shape of Peugeot 2008, Kia Stonic and Citroen C3 Aircross.

The Arona joins the larger Ateca - SEAT's first SUV and already a sales hit - and there's a still larger (and as yet unnamed) SUV from the brand due later in 2018.

A trio of SUVs can only be good news for SEAT in a part of the market which saw sales soar more than 30 per cent in the last couple of years when other sectors were sinking.

The crucial selling point of an SUV is looks - otherwise why buy a car that's going to be slower, thirstier and dearer than a hatchback with the same running gear?

In other words, image is all. Or nearly all. Give your car the right looks (the right badge helps too) and you'll sell lots of them to people happy to pay for the way their car makes them feel at the wheel.

How does the new Arona fair on the looks front? Pretty well, you'd have to say, with a chunky shape enlivened by crisp contours and hints of the no-nonsense solidity common to most cars produced beneath the VW Group banner.

Better still - and good on 'yer SEAT - is the decision to make metallic paint and (optional) contrasting roof colour - standard across the Arona range at no extra cost.

The additional spend on paint is obviously built into the price structure by SEAT but the range still kicks off at a reasonable looking £16,555. That gives you the 1.0 SE model, fitted with a 95 horsepower three-cylinder petrol engine and five-speed gearbox.

The same 1.0-litre-sized engine is also available with 115 horsepower and the petrol range is topped by a 1.5-litre unit with 150 horses and lively performance (127mph/8.3 seconds).

Diesel power, expected to appear in a smallish minority of Aronas, is represented by a couple of 1.6 litres, producing 95 and 115 horsepower and up to 70.6mpg and as low as 105g/km.

Manual gearboxes have either five or six ratios and a seven speed auto 'box is optional. It might look like a rugged off-roader but there's no option of all-wheel drive.

Inside a package measuring 4,138mm long and 1,780mm wide SEAT has found plenty of space for driver and front seat passenger and for a rear seat that won't set adults complaining about legroom.

The boot is family friendly, with 400 litres available with the rear seat in use and 823 litres with its folded flat.

Most popular trim level is expected to the FR (£19,895 with the likely choice of a 115 horsepower petrol engine) and that brings bigger alloys, a styling package, tinted windows, auto air con, chrome roof rails and four driving modes that change throttle and steering feel.

The trim range is completed by FR Sport (still larger alloys) and a pair of Aronas aimed more at luxury than sportiness - Xcellence and Xcellence Lux, the latter topping the range at £24,235 with the more powerful diesel engine and machined alloy wheels, rear parking camera and self-parking ability.

Out on Fenland roads for the Arona's press introduction the car coped well with some surfaces plainly challenged by anything solid below to keep them level, its modest dimensions helping make it feel wieldy and light when a corner arrived.

Pulled by the 150 horsepower petrol engine, this fastest Arona moved with authority when asked for a prompt overtake yet showed an impressive 45.3 mpg at the end of the drive. 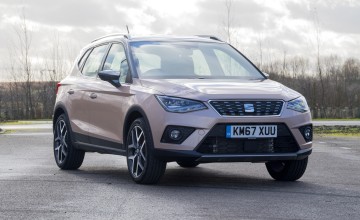 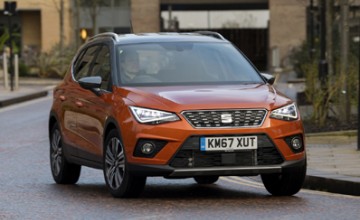 WORKING requirements mean that sometimes we can only spend a comparatively...