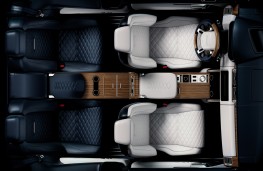 Details of the new model are being kept under wraps until its reveal on March 6 but Land Rover says production of the Range Rover SV Coupe will be restricted to 999 examples.

The company has released an interior image of the plush new model showing a four-seat layout, quilted hide upholstery with leather and veneer trim throughout the cabin.

Gerry McGovern, Land Rover's chief design officer, said: "The Range Rover SV Coupe is a highly compelling design with peerless refinement and uncompromised sophistication from its breathtaking exterior proportions to its sumptuous,beautifully appointed, interior. This is a vehicle that will resonate on an emotional level."

The coupe is said to be a tribute to the first Range Rover which was produced in two-door format when it was launched in 1970 and will be arriving as part of Land Rover's 70th anniversary celebrations.

All models will be hand-assembled at JLR's SV Technical Centre at Ryton-on-Dunsmore in Warwickshire.

"In launching the new Range Rover SV Coupe, we will offer clients an alluring combination of peerless luxury and rarity. Unveiling this special vehicle at Geneva International Motor Show in March, during Land Rover's 70th anniversary year, will be a defining moment for Land Rover, the Range Rover portfolio and Special Vehicle Operations."