By Ian Johnson on 2018-01-29 - Ian has been a member of Driving Force since its inception. He began his career in journalism in 1962 on the Cheshire Observer and took over the paper's motoring column in 1966. Specialist areas include classic cars, product launches and automotive comment. 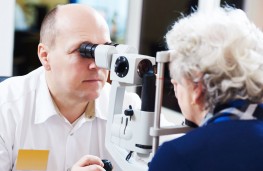 THE system of testing the eyesight of new drivers has been condemned as crude.

GEM says a detailed test of a driver's visual acuity and field of view should be required every 10 years.

Neil Wort, GEM road safety officer, said: "Speeding, drink or drug driving, driving unlicensedâ¦ these are responsible for a fraction of the crashes on our roads compared with failing to look properly, according to all the official data. Yet our current testing regime is crude and outdated."

The eyesight test was introduced to the driving test in 1937 and has only been amended in minor ways over the years to reflect changing number plate sizes. It is the only eyesight test drivers are required to undertake until they reach the age of 70.

According to GEM, the test is crude and outdated, as it only measures visual acuity (sharpness). It could also quite easily examine a driver's field of view, as is done in many US states, to check whether motorists can see and react to what's happening around them.

Many campaigns over the years have attempted to persuade the government to introduce measures that would make drivers take a more responsible view on the subject, but so far governments have declined to change the current regulations.

GEM believes that regular mandatory eyesight tests for drivers would offer a simple and effective way of reducing collisions caused by defective vision.

Neil Worth added: "We believe that all drivers should ensure they have an eye test every two years, just to ensure there are no safety concerns about their vision and to deal with any issues at an early stage.

"We would also like to see every new driver producing evidence of a recent eye test when first applying for a licence, with a mandatory test every 10 years in line with licence renewal.

"To conclude, the current driver eyesight test has not been fit for purpose for a long time, and we believe it is simply no longer acceptable for drivers to self-certify.

"What's more, many people are staying behind the wheel into their eighties and beyond. This, coupled with the greater volume of traffic and an increase in distractions, both inside and outside the vehicle, points to the clear need for more regular and detailed eyesight testing."