By Chris Russon on 2018-02-07 - The driving force behind Eurekar. Chris heads up a team of motoring correspondents under the Driving Force banner. Prior to Driving Force becoming independent in 2010 he was Chief Motoring Editor for Trinity Mirror Regional newspapers. Chris has been writing about cars for almost 40 years. 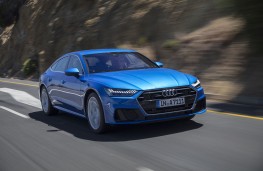 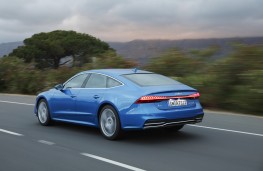 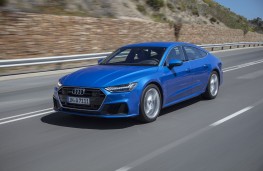 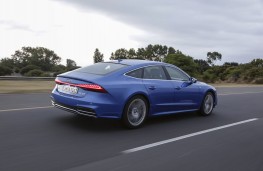 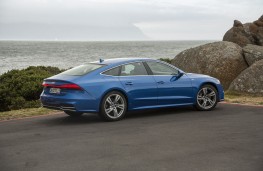 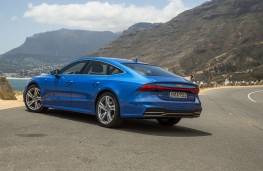 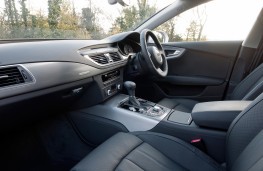 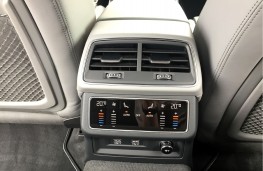 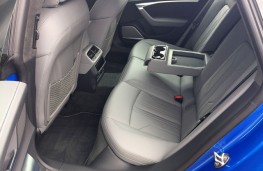 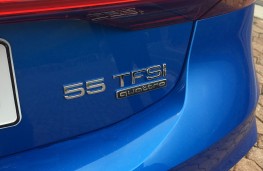 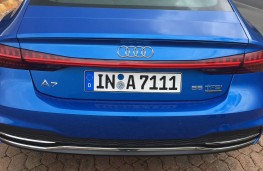 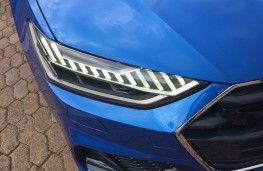 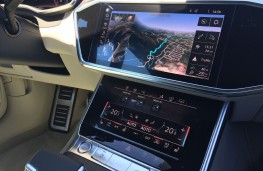 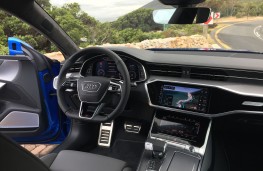 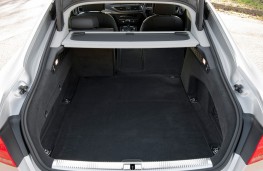 AUDI'S super-sleek A7 Sportback is being renewed with a 2018 model that takes luxury touring up a league.

Packed with sophistication, the latest A7 includes a hybrid powertrain for added economy, a new high tech interior and even the option of all-wheel steering.

At a glance, Audi's king-sized four door coupe looks familiar but the body has been transformed with subtle cuts to the sides, strike lines on the bonnet and distinctive light arrays front and rear.

Inside, there's more room than before particularly in the back and luggage space is improved to 535 litres stretching to 1,390 litres with the rear seats down.

Comfort levels are of the highest order while the cockpit has almost been completely digitised.

The only switches to be found on the dash are the starter, the volume control and the buttons for the automatic parking and surround-view camera.

Everything else is operated from two display screens mounted above each other in the middle of the facia with haptic keys which make operation tactile to the touch.

It's the new look of Audi interiors first seen on the larger A8 saloon and designed to complement the virtual cockpit multi-mode instrument panel that is standard fit on the new A7.

The new model will be on the road in April and arrives seven years after Audi introduced the original as an alternative to the Mercedes CLS.

Audi launched the new A7 in South Africa where the coast roads around Cape Town are as demanding as the scenery spectacular and while both variants are much improved it is the diesel with its added mid-range punch that has the edge for long distance work.

It is also considerably more economical, averaging 42 to the gallon on our African adventure compared to 29mpg for the petrol.

Audi claims an official fuel return of 40.4mpg for the TFSI engine with a CO2 figure of 158g/km. Fuel consumption for the diesel is rated at 50.9mpg with emissions of 147g/km.

Performance figures for the two are quite similar. Both have a top speed restricted to 155mph and the TFSI manages a 0 to 60 time of 5.3 seconds.

The 3.0-litre diesel is only a fraction slower at 5.7 seconds and although it develops only 286ps compared to the 340ps of the turbo petrol, its grunt through the gears is dramatic.

The diesel is mated to an eight speed automatic gearbox while the TFSI is fitted with Audi's seven speed S tronic sequential transmission and both come with variable drive modes and paddle shifters for maximum response.

The cars we sampled featured the optional all-wheel steering - a £1,900 extra - which not only gives more bite to the quattro all-wheel drive system but also helps when manoeuvring, taking a whole metre off the turning circle to 11.1 metres.

The diesel also feels slightly more planted on the road and comes with what Audi calls its ultra technology which moderates the quattro set up for maximum efficiency.

Both powertrains in the new A7 are mild hybrids and have an electric motor to back up the combustion engine.

With a 48-volt power supply the result is greater coasting to save fuel at cruising speeds and improved stop/start performance, cutting the engine at speeds of up to 13mph when the car detects it is slowing to a standstill.

Other smart tech includes an optional 360 degree camera system to help on the safety and manoeuvring front and a semi-autonomous cruise control that can look after the car in stop/start traffic.

A fully automated parking system that operates via remote control is on the way and will be introduced on the A7 later in the year.

However, it is style and refinement that sets these super coupes apart and the A7 experience is out of the top drawer.

Sound insulation with double glazed windows all round is particularly impressive regardless of engine and the cabin is quite serene under all circumstances. It is also roomy front and back with an airy feel, mainly down to the large back window which makes up the bulk of the tailgate.

At night the interior is set off with ambient light strips with a selection of 30 colours available while the headlamps themselves can be had in three different types - LED, matrix or ultra-bright laser lights which deliver twice the illumination.

Light signatures are becoming an important style feature and not only does the A7 have distinctive LED clusters at the front there's now a light strip at the rear which stretches the width of the tailgate below the A7's pop-up spoiler.

Sport models sit on 19-inch alloys while higher grade S line versions - priced from £57,840 for the S50 and £58,040 for the S55 - have 20-inch rims as well as sports suspension, although the cars we tried both came with an optional air damping set up (£2,000) which produced most composed dynamics.

Cars of this ilk have to cut a dash - external looks are a given - and in the new A7 Audi has created a very spcial interior that is as intimate as it is sophisticated.

It is the icing on the cake for the new A7, making it a very contemporary car at the high end of coupe couture. 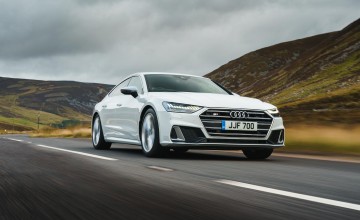 THERE used to be a mindset that drivers of large cars preferred traditional... 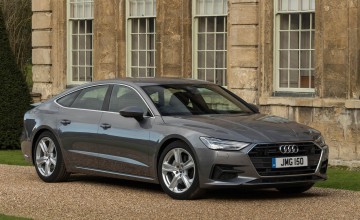 ONE of the interesting things about the automotive industry is that from time...

WHO could have imagined some years back that auto manufacturers would need to...