By Ian Donaldson on 2018-02-10 - Ian estimates he has driven more than 6,000 cars (so far) in a road testing career that's taken him around the world. He has spent several years as a full-time staff motoring editor and is now a busy freelance journalist

SOMETIMES big is simply better - like battling home in 60mph winds on a motorway that looks more running river than road.

That's what the M74 resembled as the four of us headed south for home after a happy three days in Glasgow and we were glad it was a big car doing the donkey work.

Ford's biggest, in fact, in the chunky shape of the Canadian-built Edge, an SUV that's been on sale in the North America for ages but has only now become available here in right hand drive.

And it is big; giving away mere millimetres to something as obviously massive as a Range Rover Sport and nearly as heavy too. So it laughs at mini-hurricanes and hardly raises a mechanical eyebrow to small lakes of standing water.

Further comparison with a Range Rover Sport stops here, on the obvious grounds that the dearest version of the Ford (a little over £42,000) is still nearly twenty grand shy of where the Range Rover starts from, at a touch over £60,000.

Something like the Hyundai Santa Fe is a more likely competitor and shares a characteristic with the Ford Edge - the lack of a fancy name badge - that means it will forever occupy a less prestigious slot than Solihull's finest.

Look beyond the badge, though, and you discover a car that gets the essential basics right and piles on the luxury touches too if you're prepared to head towards the top of its range.

So, there's lots of room for people (but no third row of seats) and a big boot too. A 2.0-litre diesel engine, with two power outputs, is fitted across the range and there's a choice of manual or automatic six-speed gearboxes. The car decides when it needs all-wheel drive, saving some fuel when it doesn't.

Even with the more powerful engine on board, the Vignale range topper is no ball of fire. It's not a big SUV's role in life to mimic a hot hatch and an owner will be pleased with that.

Instead, progress is marked by a smoothly compliant ride and pleasing absence of noise, especially from the rough surfaces that plague our roads and turn many cars into reverberating boom boxes.

Further pluses come from a trip computer reading of 37.8mpg after more than 700 miles of a sometimes taxing schedule and the quick realisation that the Edge's edges (sorry) seemed to shrink as the miles passed, until it didn't feel that big after all.

The interior can't match an Audi for class but, especially in Vignale trim and with a few extras boxes ticked, feels utterly luxurious. Heated rear seats (£200) were a big hit, along with huge panoramic sunroof (£800) and heated steering wheel (£125). 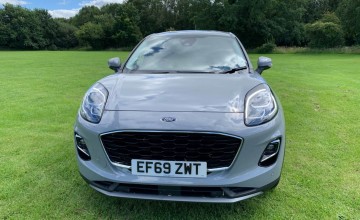 REMEMBER that small coupe model from the 90s called the Ford Puma? Well, the... 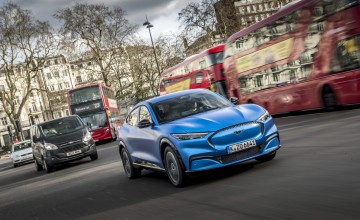 Mustang Mach-E charges in for Ford

FORD has charged into the capital to launch its Mustang Mach-E electric vehicle...