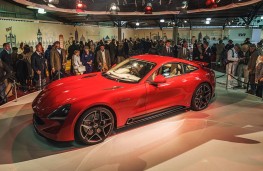 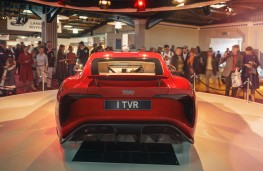 The Griffith is the first car launched by TVR since the company's relaunch in 2013, and it caused a big stir upon its initial reveal back in September 2017.

Going on display at show it's sure to be a hit with thousands of automotive enthusiasts at the ExCeL.

The new sports car will take pride of place on the show's all-new "Built in Britain" feature, which displays a whole host of vehicles designed and built on UK shores. TVR joins several other brands still to be announced.

The Griffith packs a real punch under its sleek body with a 5.0-litre V8 engine capable of sending it from 0-60mph in less than four seconds and on to a top speed of 200mph.

The Griffith name is definitive for TVR. It first appeared in 1963, then again in 1990 - and now in 2018 and it is sure to turn heads at the show thanks to its typical TVR swooping body, side-exit exhausts and sculpted wheelarches.

Alec Mumford, chairman of the Confused.com London Motor Show, said: "When we first laid plans for our Built in Britain area, we did so with the ambition of bringing some national pride and heritage to the motor show.

"TVR is just about as British as it gets. The new Griffith is a seriously impressive machine that perfectly captures the iconic spirit of TVR, and we are very excited to have it on display surrounded by its compatriots."