How not to buy a

By Ian Johnson on 2018-02-19 - Ian has been a member of Driving Force since its inception. He began his career in journalism in 1962 on the Cheshire Observer and took over the paper's motoring column in 1966. Specialist areas include classic cars, product launches and automotive comment. 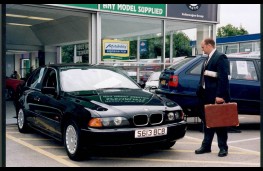 SOME years ago it was proudly announced that the days of the car thief were over.

Complex immobiliser systems were claimed to have outsmarted the auto-criminal and put motoring on a new, more secure course.

And for a time the hot-wire hooligans were faced with a problem.

But the depths to which a criminal mind can sink should never be underestimated.

Car theft is now back with a vengeance and methods of depriving us of our wheels range from the criminal shoving an empty water container between the wheel and bodywork to create a noise, hoping the driver will get out and leave the key in the car' to sophisticated scanners and the bare faced cheek of breaking into the house to steal the key.

Car theft has increased by 30 per cent over the last three years so where do these cars go? A lot end up in the used car market and it is up to the buyer to be very wary in this respect.

With the last annual police recorded vehicle theft count exceeding 85,000, stolen vehicles recovery expert, Tracker, is urging used car buyers to remain vigilant when on the hunt for a bargain.

Andy Barrs, head of police liaison at Tracker, says the trend in theft could lead to an increase in the number of stolen cars being cloned and offered for sale by unscrupulous thieves.

This doesn't take into account the tens of thousands of vehicles stolen in previous years that could also be offered to innocent buyers.

Says Andy:"There are serious consequences if you are caught driving a stolen car.If you are pulled over by the police who check the vehicle and discover it to be stolen, you could face being arrested for either theft or handling stolen goods.

"Even once you've proved you are an innocent purchaser, you still stand to lose both the car and the money you paid for it because you are not the legal owner and your insurance policy is unlikely to cover this scenario."

The good news is that anyone in the market for a used car can protect themselves in a few easy steps, says Tracker.

When viewing a potential purchase, check the vehicle for new registration plates. If they are new, buyers should ask why they have been replaced because it could be disguising the car's true identity.

Check that both sets of keys are present and work, since it could indicate the car is stolen or, allow thieves to steal it in the future with the second key.

Don't forget to check the vehicle identification number (VIN) for any visible signs that it has been altered; the VIN is usually visible via an inspection plate adjacent to the driver's seat and the front nearside windscreen area.

Similarly, head to the GOV.UK website and look at the ‘check you're not buying a stolen vehicle' section as it contains valuable advice that could point to the vehicle as being stolen.

Avoid a seller who won't give their address or phone number and offers to meet at a car park or service station could well have something to hide.

It's also worth checking that the title and registration of the vehicle match the name and address of the seller.

Other points to remember include asking for proof of residency and check this against the V5 document.

Do the window markings on all the windows match? If one is different it could have been replaced as a result of a forced entry or a bid to remove its legal identity.