By Ian Johnson on 2018-03-01 - Ian has been a member of Driving Force since its inception. He began his career in journalism in 1962 on the Cheshire Observer and took over the paper's motoring column in 1966. Specialist areas include classic cars, product launches and automotive comment. 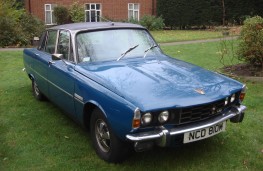 This was the car that netted a new generation of Rover drivers, yet still managed to please the grey-templed brigade who had been buying Rovers for years.

It was a unit-construction car with many new features and certainly looked the part with its rakish styling.

But there was a problem and that was the fact that the nearby Triumph factory, then in opposition to Rover turned out its own executive express, the Triumph 2000. Whereas the Rover had a four-cylinder engine, the Triumph had a silky six-cylinder.

Many at the time queried Rover's plan to stick with a four-pot engine, but time started to show that the 2000 needed more muscle.

The result was one of the best ideas Rover ever had - putting a beautifully smooth 3,532cc V8 engine in the 2000 bodystyle.

Rover purchased the rights to the innovative Buick aluminium V8 and once it was modified to allow its use by Rover, it became an instant hit.

The new version, known as the 3500 was introduced in April 1968, just after Rover was purchased by Triumph's owner Leyland, and continued to be offered until 1977.

It was instantly adopted by the police who found it to be a perfect Jaguar catcher and at the time all seemed rosy for the 3500 which was offered with automatic and in later years, manual gearbox versions.

It was necessary to modify the under-bonnet space to squeeze the V8 engine into the engine bay.

The front suspension cross-member had to be relocated forward, while a more visible change was an extra air intake beneath the front bumper to accommodate the larger radiator.

The letter "S" on the 3500S did not denote "Sport", it was chosen because it stood for something specific on manual cars: "Synchromesh".

However the 3500S was noticeably quicker than the automatic version of this car with a 0-60mph time of nine seconds. You could also squeeze 24mpg out of the manual version.

This was the car that could have really flown the flag for Great Britain in tough European markets.

But the 3500 became a victim of its own manufacturer.

In its later years the car became stricken by appalling production problems at British Leyland.

The AA magazine in 1975 branded it the worst new car in England.

It reported that a Rover 3500 purchased in 1974 had covered 6,000 miles during its first six months, during which period it had consumed three engines, two gear boxes, two clutch housings and needed a complete new set of electrical cables. The car had spent 114 of its first 165 days in a workshop.