By Ian Johnson on 2018-03-05 - Ian has been a member of Driving Force since its inception. He began his career in journalism in 1962 on the Cheshire Observer and took over the paper's motoring column in 1966. Specialist areas include classic cars, product launches and automotive comment. 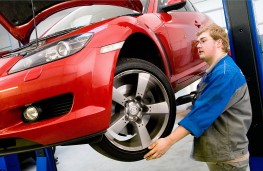 MARCH is set to be mad MOT month.

New analysis released by Kwik Fit, the UK's largest MOT tester, reveals that this the next few weeks are set to break MOT records.

March will see the largest number of MOTs carried out in any single month since the introduction of twice-yearly registrations in 1999.

This peak comes because the new month sees cars which were newly registered in March 2015 requiring their first MOT. 492,774 new cars were registered three years ago, the largest monthly figure since August 1998 - the last year before the switch from one to two new registration plates per annum.

As a result, this month will see the biggest monthly increase in three year old cars in almost two decades.

It is not only the growth in three year old cars which is going to cause increased demand for MOT appointments this month.

Kwik Fit's analysis of 22.3 million new car registrations over the last 13 years reveals that almost one in five (18.9 per cent) cars were registered in March. This is more than double the number which would have been the case if registrations were spread evenly across the year and results in even greater demand for MOT appointments at this time of year.

The huge increase in the number of new cars being bought on personal contract plans (PCP) over recent years will have a significant impact on the ownership of those three year old cars.

The majority of PCPs last for three years, with many drivers switching to another new car at the end of the agreement.

When combined with the cars that were bought as fleet vehicles and so will also be sold on by the fleet companies, Kwik Fit analysts suggest that at least 389,000 three years old cars will be coming on to the used car market over the coming weeks.

Kwik Fit advises those looking to buy a car of this age to have a clear checklist.

While the quality of modern car manufacturing is such that the core structure of a three year old vehicle is unlikely to be compromised, the wearable components are a different matter.

These cars will have collectively travelled over 4.9billion miles, an average of 29,943 miles, by their first MOT.

With the typical life expectancy of a tyre currently around 17,000 miles, depending on driving style and conditions, many three year old cars will be close to needing their third set of tyres, something those in the market for this age of car should be aware of.

Roger Griggs, communications director at Kwik Fit, says: "March is always a peak month for MOTs, but this year it will be busier than ever as the record breaking new car sales of 2015 feed through. Our research has shown that many drivers tend to leave their MOT to the last minute but this can be a particular problem in March when all testing centres get very busy.

"Some owners don't realise that they can have their car tested up to a month before their MOT expires and still keep the same anniversary, which helps to avoid a last minute panic. While thinking about the MOT it's also worth remembering that maintenance is not just an annual activity - we should all be checking our cars regularly throughout the year."