By Ian Johnson on 2018-03-08 - Ian has been a member of Driving Force since its inception. He began his career in journalism in 1962 on the Cheshire Observer and took over the paper's motoring column in 1966. Specialist areas include classic cars, product launches and automotive comment. 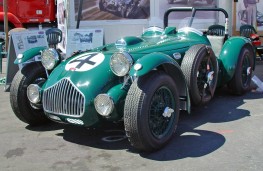 IN 1949 the world was driving towards new horizons in performance and driving enjoyment fueled by a tremendous appetite for cars which were faster and more exciting than ever before.

And it was not just in Great Britain that this need existed.

The result was the J2 roadster which weighed in at just 18.5 cwt.

Under the bonnet could be a choice of engines. Cadillac, Buick and Oldmobile V8s included in the mainstream choices for the transatlantic market and Ford and Mercury V8s for the UK.

All of this provided a potent combination of a lightweight, hand-formed aluminium body fitted with coil springfront suspension de Dion type rear axle and ferocious power.

The J2 proved a highly competitive international race car for and was not a drive for the faint hearted who chose the road car for their everyday wheels.

The J2 was followed by the J2X in late 1951. The chassis remained unchanged from the previous J2, and an attempt was made to improve handling.

The J2X became the most coveted model of its ilk and was widely regarded as a hairy, exciting and never to be forgotten motorbike of a car.

When you realise that this 5.5-litre speedster could achieve 130mph with a 0-60mph sprint in the early 1950s the truth dawns that this was a truly amazing vehicle.

It was very much a car for the specialist and did not feature the creature comforts of arch-rival Jaguar.

Nor could it compare on price to the big car marque so not that many were made. The ones that survive are icons of that golden age when top class British designers and car builders flexed their muscles to show that Britain ruled in sports car style.