By Ian Johnson on 2018-03-20 - Ian has been a member of Driving Force since its inception. He began his career in journalism in 1962 on the Cheshire Observer and took over the paper's motoring column in 1966. Specialist areas include classic cars, product launches and automotive comment. 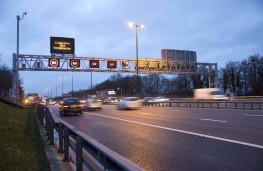 WITH cars being fitted with a plethora of gadgets including speed limiters and reminders that we are breaking the law, it should follow that injuries in speed-related accidents should be declining rapidly.

Not so because nearly 20,000 people are injured on Britain's roads in speed-related accidents every year, according to new research by Direct Line Car Insurance.

Between 2012 and 2016, the most recent data available, there were 97,256 speeding related casualties, the equivalent of 53 people injured every day.

These casualties resulted from 62,901 accidents caused by speeding, with 34 vehicles a day involved in speed-related accidents on average.

One in nine (11 per cent) of all accidents on Britain's roads over the past five years are speed related, with drivers either exceeding the speed limit or travelling too fast for the road conditions.

Nearly 15,000 (23 per cent) speeding-related accidents over the past five years have been classed as serious, causing 17,636 serious injuries or deaths.

Speeding is the second most deadly contributing factor in road accidents over the last five years and the cause of 2,101 deaths.

This is second only to loss of control, which claimed 2,561 lives over the same period.

The number of speeding accidents leading to death or serious injury has risen slightly (one per cent) over the past five years, although the total number of accidents has fallen by 14 per cent.

More than two fifths (43 per cent) of all accidents caused by speeding occur on A roads, while one in seven (15 per cent) take place on B roads. Just four per cent of speeding related accidents were on motorways.

Britain's worst speeding casualty regions are the West Midlands and South West, where nearly a fifth (18 per cent) of all casualties resulted from speeding motorists.

Unsurprisingly, these regions are also the two with the highest proportion of speed-related accidents, with one in six (16 per cent) accidents on roads in these areas due to speeding.

The South East has the highest number of casualties due to speeding, but it is a low proportion of all casualties caused by road accidents.

Cars account for the majority of all speeding accidents (77 per cent) followed by motorcycles (14 per cent), LGVs (four per cent) and HGVs (one per cent).

Motorcycles have the highest chance of being involved in accidents caused by speeding relative to the number in Britain, with seven per 1,000 vehicles likely to be involved in a speeding accident, compared to two per 1,000 cars.