More women in the

By David Whinyates on 2018-04-16 - David is one of the UK’s most experienced motoring writers and was instrumental in setting up the Driving Force syndication service for Britain’s biggest regional newspaper group. Former Chief Motoring Editor of Trinity Mirror Regionals, he is Driving Force’s Consultant Motoring Editor and a director of Driving Force Media Ltd. 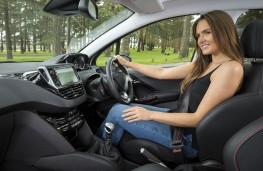 THE gender gap is closing - at least as far as the world of motoring in the UK is concerned.

Female car ownership is now at record levels, hitting 11.8 million in 2017 - that's 21 per cent more than a decade ago, according to new data released today by motoring's trade body, the Society of Motor Manufacturers and Traders (SMMT).

What is claimed to be the UK's biggest automotive analysis shows that the face of motoring is changing dramatically.

And there's been a significant shift in buying habits with more and more drivers opting for automatic transmission models.

Although manual gearboxes still dominate, the number of automatics has risen 70.5 per cent since 2007, with some 8.4 million now on the road.

And last year, some 40 per cent of all new cars registered came with automatic gearboxes, double the proportion in 2007.

The data also reveals the growing diversity of choice available to drivers. The number of different car models has grown from 1,200 ten years ago to 1,500 with a staggering 65,000 different model specifications available, compared with 56,000 in 2007.

Smaller models continue to make up the bulk of the UK's car parc - mini, supermini and cars classed in the lower medium sector made up 62.3 per cent of the market in 2017.

But there's been a dramatic shift in sales of SUVs or what the SMMT calls dual purpose vehicles, sales of which have increased by more than 90 per cent over the past decade.

Today's consumers are also opting for different colour choices. According to the survey, red and green cars are significantly less popular than they were a decade ago with silver, black, blue, grey and white the top choices among buyers in 2017.

According to SMMT Chief Executive Mike Hawes: "This latest analysis shows the shifts in consumer preferences and behaviour over the past decade and provides insight for car makers and dealers to help them adapt to changing consumer behaviour in the future."

The SMMT Motorparc database goes back over 23 years and enables the analysis of records for almost 40 million cars and commercial vehicles currently on the road, broken down by make, model, region, town and postcode.