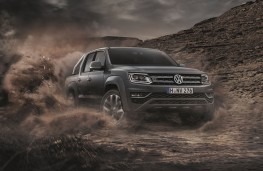 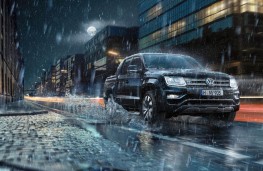 VOLKSWAGEN is set to unleash its most powerful pick-up to date in the shape of a new top-of-the-range version of the Amarok.

First shown in concept form at last year's Frankfurt motor show, the newcomer promises to be a true super-truck with a V6 turbodiesel pumping out up to 272PS of power and 580Nm of torque.

With the new engine, the 2018 Amarok has a power output of 258 PS - a significant increase on the 224 PS V6 which had been the top engine until now. But that power can be briefly increased to 272 PS when using the overboost facility.

Permanent 4MOTION all-wheel drive and an 8-speed automatic gearbox come as standard on the Amarok with the new top engine which will be available in both Highline and Aventura trim levels when it goes on sale at VW Commercial dealers in September.

To make it stand out from the rest of the range, the top-spec Aventura version will come with 20 inch, high gloss, dark graphite alloys, titanium black roof liner, pillar trim and other roof elements with seats upholstered in titanium black Nappa leather.

In addition to the comprehensive standard spec available across the Amorok range, the V6 Aventura gets a light and sight package which includes rain sensing wipers, front fog lights with cornering lights and electric fold-in exterior mirrors.

Prices for UK models have yet to be decided, but German market models will start at â¬43,180 - around Â£37,300 at current exchange rates - excluding VAT 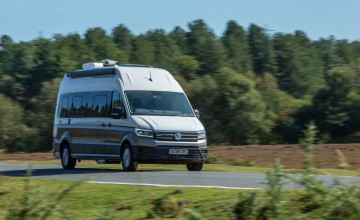 Grand side of California dreaming

CARRY on Camping... it could be an appropriate catchphrase for one of the...