By Ian Donaldson on 2018-04-21 - Ian estimates he has driven more than 6,000 cars (so far) in a road testing career that's taken him around the world. He has spent several years as a full-time staff motoring editor and is now a busy freelance journalist

ONE road on the hilly approach to the Suzuki's temporary home was blocked by snowdrifts and the other softly glistened under thin ice.

Good then that between the front seats on this particular Suzuki sat a dial with a setting reassuringly marked 'snow'.

Twist it from 'normal' and the car - already set to dip into all-wheel drive the instant a wheel starts to slip - would also go gently putting its power on to the road, giving you every chance of maintaining forward momentum.

Unlike, you'd have to say, the drivers of powerful and, crucially, rear wheel drive BMWs and Jags who sensibly gave in to the elements and headed home.

You would hardly buy this Suzuki S-Cross simply for its ability to outwit a blast of freakish weather (unless perhaps you were a vet in a Yorkshire dale) but by goodness its determined go-almost-anywhere pluck was good to have.

A day or two later as the sun shone and drying roads revealed a new crop of potholes the S-Cross's other strengths came to the fore.

There are many of them, all built into a car that even after a thorough restyle to make it look more assertive is still a modest example of the current craze for SUVs over hatches and the like.

Pick a top of the range SZ5 trim and your S-Cross will come thoroughly well equipped. The goodies ranges from a huge glass sunroof, leather trim and keyless entry and start to cruise control, 17 inch alloy wheels and Bluetooth integration.

What you don't get is much feeling of plushness inside. This is an obviously well built car (in Hungary, as it happens) that experience of the brand tells you will last for ever, but fancy it is not.

Nothing fancy about the way it drives, either. Here is a car that goes about its business with a quiet aplomb, being perfectly fast enough and nicely rounding off the worst excesses of a typical British road without ever making you feel you've slipped into a sports car by mistake.

There's plenty of room for the family and a decent boot - and 42mpg after a demanding week of snow and sunshine is more than acceptable too.

Like the lack of flash on the outside, the interior simply wants to get on with it. That's a quality that really only comes to the fore as the miles roll by beneath the tyres and the months are ticked off on the calendar hung on the back of the utility room door. 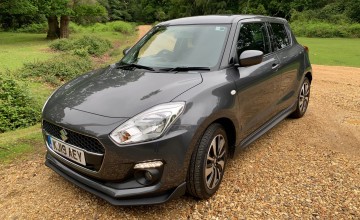 SUZUKI is a manufacturer that's going from strength to strength gaining...