monarch of the road

By Ian Johnson on 2018-05-03 - Ian has been a member of Driving Force since its inception. He began his career in journalism in 1962 on the Cheshire Observer and took over the paper's motoring column in 1966. Specialist areas include classic cars, product launches and automotive comment. 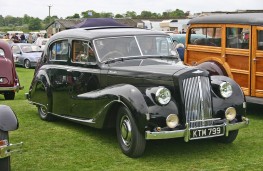 ONE of the most underestimated cars of all time, the original Austin Princess was a true monarch of the road.

It may not have been a Rolls-Royce or a Daimler, but the Princess - most often seen as a lengthy limousine - had true stature.

Many of us have travelled in them at some time or other, mainly to weddings and funerals, but the fact remains that these mainstays of formal motoring were a landmark of British motoring history.

The Austin Princess was a series of large, luxury cars made by Austin and its subsidiary Vanden Plas from 1947 to 1968.

The first example the A120 was launched in 1947 as the most expensive flagship model in the Austin range at the same time as the A110 Sheerline and the two were built on the same chassis design at Longbridge.

The A110 produced 10 less horsepower being fitted with a single carburetter. Both cars always had bodies that were massive and heavy in appearance.

The more familiar A120 was supplied as a saloon or limousine by Vanden Plas. The saloon in particular is worthy of note as it became successful as a top-executive car.

Many Princesses and Sheerlines found their way into the world of civic and ceremonial duties and served for many years as dependable and luxurious limos for VIPs.

The Princess was improved over the years and one of the most significant models was the long-wheelbase version in 1952 with a longer body and seven seats.

All shared the same straight six-cylinder engine but little else differed except some bodywork amendments. The radiator was upright, restrained and absolutely posh. If you saw that in your rear view mirror you certainly gave it a second glance.

The Princess was always more modern in style than the equivalent-sized Bentley or Rolls-Royce and, for the saloon, the price was little more than two-thirds of the Rolls-Royce.

From August 1957 the Austin part of the badging was dropped so it could be sold by Nuffield dealerships. From May 1960, the Vanden Plas name was added in front of "Princess".

The original Princess was powered by a 3.5-litre straight six engine. This was later enlarged to a 4.0-litre unit without further modifications. Later models offered the choice of triple or single carburetors and twin or single exhaust systems.

However, the more powerful version could only achieve 12 to 14 mpg. The single carb however gave slightly better fuel consumption.

There are a number of survivors, especially limousines. But the saloons are a rarity, many used as taxis in their later years and run into the ground.

The last model, the Princess IV was discontinued in 1959 and replaced in the catalogue by a much smaller model, an upgraded Austin Westminster. Known as the Vanden Plas Princess 3 Litre, which was in its own way a massively impressive car.

However, it later years the Princess name was cheapened with the introduction of the wedge shaped family car of that name by BL and things were never the same again.