By David Whinyates on 2018-05-04 - David is one of the UK’s most experienced motoring writers and was instrumental in setting up the Driving Force syndication service for Britain’s biggest regional newspaper group. Former Chief Motoring Editor of Trinity Mirror Regionals, he is Driving Force’s Consultant Motoring Editor and a director of Driving Force Media Ltd. 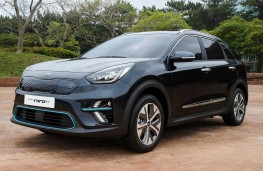 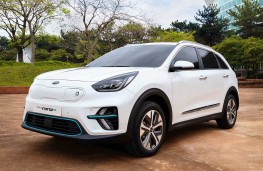 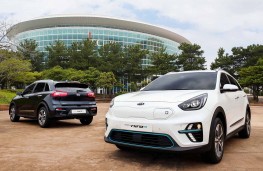 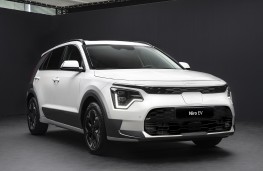 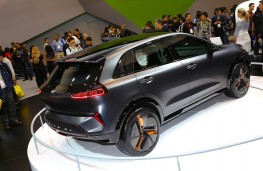 FINAL production versions of Kia's forthcoming all-electric Niro have been unveiled in Korea just a few months after being revealed in concept form.

The production car was due to receive its global debut at the Paris Motor Show in September, but progress has been so rapid that the Korean manufacturer decided to give the Niro EV its' first public outing at the 5th International Electric Vehicle Expo in its home country where it will go on sale in the second half of this year.

The final production version retains some of the concept car's features - notably the arrow-head shaped LED daytime running lights, and coloured trim around the lower front grille and sidelight clusters.

Otherwise the styling remains pretty much true to the rest of the Niro family with the exception of the radiator grille which is replaced by a patterned panel that also houses the charging point.

In its home market at least, the Niro EV will come with a choice of next-generation electric vehicle powertrains, using either a high-capacity, 64 kWh lithium-polymer battery pack which Kia claims will provide a range of more than 236 miles on a single charge or an optional 39.2 kWh battery system giving a range of almost 150 miles.

It's not yet clear when the Niro EV will be available in the UK or whether or not both battery options will be made available here. More details will emerge following its European launch in September. 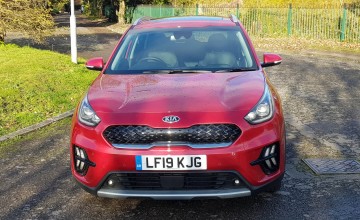