By Ian Donaldson on 2018-05-20 - Ian estimates he has driven more than 6,000 cars (so far) in a road testing career that's taken him around the world. He has spent several years as a full-time staff motoring editor and is now a busy freelance journalist

THE pillion passenger spotted us first, tapping the rider's back and pointing to the Kia Stinger they were both passing slowly in some endless roadworks.

Then the purring sports bike slowed a little as they both took in the lines of a car they'd obviously not seen before - and evidently rather liked.

The Kia bigwigs back in Korea would smile at the scene above, knowing that part one of their project had been very well met.

Here was a car wearing a badge known mostly for solid value but now worth a second glance in the style stakes too. If it goes as well as it looks, much grander (mostly German) badges had better watch out.

There's a lot of Germany in this car, designed in Kia's Frankfurt studio under the watch of a German (and a Frenchman) and honed on the (German) Nurburgring race track by a German engineer poached from the fast car division of (German) BMW to make Kias better to drive.

That the Stinger doesn't achieve a first round knockout on the likes of BMW, Audi and Mercedes-Benz is no surprise - the opposition has been playing the prestige game for decades.

But that it comes even tolerably close - and it does - will have alarm bells ringing in some prestigious European boardrooms. The big, bold and accomplished Stinger is merely the first salvo in Kia's assault on the posher end of the car market.

Beneath those sultry four-door lines beat either a 2.0-litre diesel or a couple of petrol units, one of them producing the fastest Kia ever, thanks to its twin turbocharged 3.3-litres and capable of 168mph. All of them drive the rear wheels (very BMW) through an eight-speed automatic gearbox.

This car's 2.0-litre petrol engine is less potent but still provides plenty of performance when pushed, with 149mph on tap (on a German autobahn, of course) and capable of nudging 62mph in 5.8 seconds. It also showed a commendable 34.9mpg after 500 miles on test.

This least expensive entry to Stingerdom (prices range from £32,025 to £40,535) also enjoys a corner or too, turning in to them with the sort of eager precision that you might otherwise expect from a... sporty BMW.

So, the Stinger looks good (with a big boot and proper grown up space in the rear seats) and goes well enough to produce a smile but the final clincher in the sales mix is the car's sheer value for money.

The list price is no pushover - Kia's long ago became good enough not to sell on bargain basement terms. But you get an awful lot of kit for your cash without needing to dip into an expensive options' list - in the usual German manner. 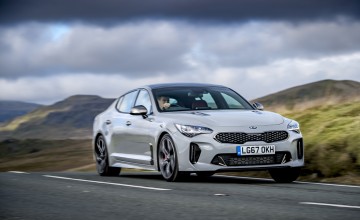