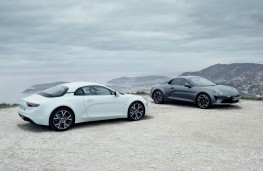 FRENCH sports car company Alpine has announced prices for its new A110 models which will start from £46,905.

The lightweight Pure and Legende A110s have the same technical set up as the Premiere Edition models which are already sold out.

With a mid-mounted 1.8-litre turbo engine developing 252ps, an aluminium chassis and body frame and double wishbone suspension all round, the newcomers tip the scales at just over a tonne.

Official fuel figures are 46mpg with emissions of 141g/km.

Pure versions of the A110 are more driver focused and come with Sabelt monocoque seats and 17-inch alloy wheels.

It's fitted with a three-mode drive selector with settings for normal, sport and race with an active exhaust and Brembo brakes among an extensive list of options.

Legende models are priced from £50,805 and are more set up for GT work with a more refined cockpit including a Focal sound system, heated seats and a parking camera.

The also sit on special 18-inch alloys designed to pay tribute to the tribute to the original motif of the A110 Berlinette 1600S which enjoyed considerable success on the rallye circuit in the 1960s.

With Alpine now part of the Renault stable, all models come with a three year, 60,000 mile warranty which can be extended to four or five years.