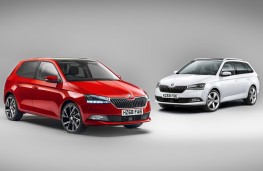 THE new-look Skoda Fabia will be priced from £11,160 when it goes on sale in the UK later this year.

With an all petrol line up the new model will be available as a hatch or estate topping out at £17,950 for a 1.0 TSI DSG SE L estate.

The TSI engines come with petrol particulate filters and the higher powered engine can be had with a seven-speed semi-automatic DSG gearbox as an option.

LED daytime running lights are now standard across the facelifted range, while front assist anti-collisions systems and a multifunction trip computer are included on all models for the first time.

At SE L level the Fabia now comes with an Amundsen satellite navigation, a year's subscription to Skoda's Infotainment online system, lighting in the front centre console and 16-inch alloys

Options include LED headlights at £960, blind spot detection and rear traffic alert at £390 while 18-inch alloy wheels can be had on the Monte Carlo hatch for an extra £600.

The new Fabia has a revised bonnet and grille plus narrower headlights giving the car a sleeker appearance while at the rear the bumper now includes added reflectors to increase the car's visibility at night.

And as well as coming with an ice scraper stowed in the fuel filler flap as part of Skoda's Simply Clever features, the new car now comes with a tyre tread depth gauge.

First deliveries are expected to start in September.