By David Whinyates on 2018-07-03 - David is one of the UK’s most experienced motoring writers and was instrumental in setting up the Driving Force syndication service for Britain’s biggest regional newspaper group. Former Chief Motoring Editor of Trinity Mirror Regionals, he is Driving Force’s Consultant Motoring Editor and a director of Driving Force Media Ltd. 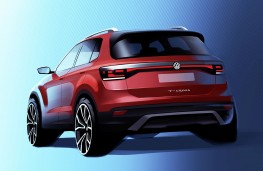 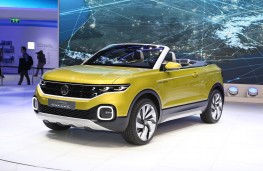 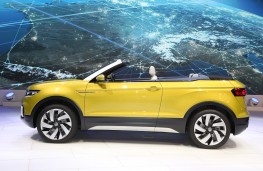 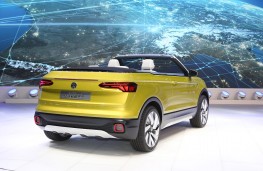 YET another mini-crossover is on its way in the shape of the Volkswagen T-Cross which will take the German maker's portfolio of high-riders to five.

Based on the same running gear as the Polo, it will be VW's take on the SEAT Arona and will join the T-Roc, Tiguan, Tiguan Allspace and Touareg in showrooms next year following its launch at the Paris motor show in September.

Although details are scant, VW has released this design sketch teaser image which - apart from the bulging wheel arches and big alloys - shows clear similarities to a design study which graced the Volkswagen stand at the 2016 Geneva Motor Show.

That show car - called the T-Cross Breeze - was a smart-looking SUV-cum-convertible and the fact that Volkswagen says that the production T-Cross is part of a "programme" rather than a single model, opens up the possibility of a drop-top model further down the line.

The T-Cross will be a late-comer in a market which is already overcrowded and will compete against the likes of the Citroen Aircross, Renault Captur, Hyundai Kona, Kia Stonic, Ford Fiesta Active, its own stablemate, the SEAT Arona, and the Nissan Juke - itself due for an extensive revamp next year.

It will be slightly shorter than most immediate rivals at 4,107mm, but among innovative features which VW says the T-Cross will introduce will be a back seat which can be adjusted lengthwise allowing more knee room or more room for luggage.

The company says the T-Cross will come with a wide range of standard-fit assistance systems. Including traffic monitoring and lane departure warning systems.