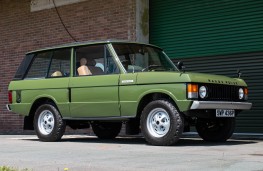 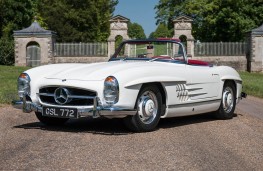 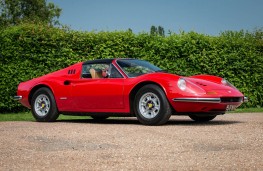 A RANGE Rover more than 40 years old, with a former Royal owner, made more than £100,000 at an auction during the Silverstone Classic festival.

Silverstone Auctions, the company that sold the rare 1975 two-door Range Rover, said the final hammer price of £101,250 was the second highest figure ever reached for this model.

Described as fresh from an exacting restoration, the car came with an unspecified Royal connection and went for more than £30,000 over its lowest pre-sale estimate.

Another star of the weekend and the headline lot of the sale was an exceptionally presented 1958 Mercedes-Benz 300SL Roadster estimated at £700,000 to £800,000, the highest valued lot of the sale. Pushing well past its pre-sale estimate, the 300SL sold after a long bidding war to a bidder in the room for £860,625 including premium.

A 1972 Ferrari Dino 246 GTS was also the subject of highly competitive bidding, with the UK-supplied, right-hand drive example finding its new home for the sum of £343,125 including premium, more than £70,000 above its lower estimate.

The modern classics line up was headlined by a rare 1992 Mercedes-Benz 190 E 2.5-16 Evolution II with just 34,000 recorded miles. In one of the most dramatic sales of the day, a passionate bidding war was eventually concluded with a winning bid of £158,750 including premium, taking the sale price over the lower estimate by £30,000, and ruling out other bidders.

Other notable sales included the success of numerous Jaguar E-Types. A matching numbers, restored 1962 Jaguar E-Type Series l 3.8 FHC in ready to drive condition exceeded its estimate, selling for £112,500 to a buyer in the room.