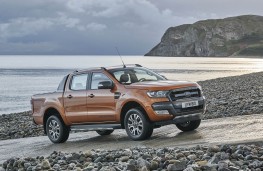 THE Ford Ranger, Toyota Hi-Lux, Nissan Navara and Mitsubishi L200 surprisingly rank among the Top 10 Most Desired used cars on sale in Britain.

CarGurus, an online automotive marketplace created by TripAdvisor founde Langley Steinert, analysed the number of shoppers searching for every model with at least 1,000 cars for sale since the start of the year to create its ‘Desirability Score'.

Whilst the Top 10 includes some expected highly-desired choices, such as luxury SUVs Range Rover and Audi Q7, it also features the unexpected.

Data shows the Ford Ranger is the most in demand used car on sale this year with 66 people searching for every model available.

The evergreen Porsche 911 was the only non-SUV or pick-up truck to make the hot list with 39 users searching for every model on sale.

CarGurus also analysed those models with under 100 for sale since the start of the year to create the Desirability Score for the rarest cars in Britain.

Here, the super luxury Bentley Arnage (338 user searches for every available model) and super car Lamborghini Gallardo (254) were joined in the Top 7 by the truly unique Dodge Nitro - the American built SUV that was launched in 2007.