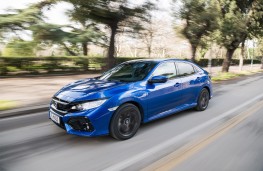 HONDA is fitting a nine speed automatic gearbox to its 1.6-litre diesel version of the British-built Civic - the first time such an option has been available on the car.

The new transmission will be offered on both the hatchback and the new saloon versions of the Civic which is produced at Honda's UK factory at Swindon.

The company says the spread of ratios in the gearbox means the automatic delivers smooth shifts, and a feeling of linear acceleration through the gears.

The transmission is also capable of skipping gears for quick response, for example shifting down directly from 9th to 5th gear or from 7th to 4th gear, in addition to one- and two-gear downshifts.

Prices for the new diesel automatic start from £23,760.