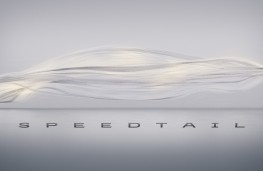 THE McLaren hyper GT model will be known as the Speedtail, the British sports car maker has confirmed.

With a petrol-electric hybrid powertrain model and the ability to exceed the 243mph top speed of the McLaren F1, the super car has a price tag of £1.6 million and all 106 that will be produced have already been snapped up.

Like the F1, the Speedtail has a centrally mounted driving position with two other seats either side and is the next addition to McLaren's Ultimate series.

As the fastest ever road going McLaren the company says the car will ‘deliver the unparalleled blend of extreme performance and sporting luxury that befits its status as the ultimate road-going McLaren'.

Production is due to begin at the end of next year, with every McLaren Speedtail personalised to each owner's taste by McLaren Special Operation, the division of McLaren Automotive responsible for bespoke customer commissions.

Previously, the model was known only by its BP23 code name and McLaren says the Speedtail name evokes the car's performance and streamlined design.

A public reveal of the Speedtail is promised before the end of 2018 with a private preview for its depositors ahead.