out of this world

By Steve Orme on 2018-07-26 - Steve has been on the motoring circuit since 1979 and has a particular interest in 4x4 with access to off-road terrain. Steve writes the weekly Full Chat column which takes an irreverent look at motoring. A member of the Northern group of Motoring Writers. 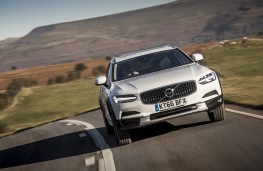 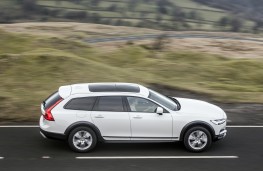 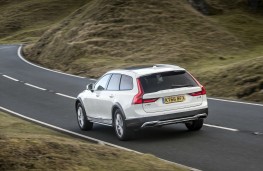 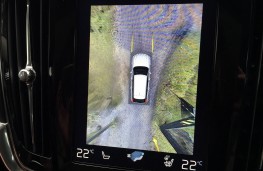 I WATCHED a film recently by Ridley Scott called The Martian. Mr Ridley is a renowned director although he did not work on my favourite, Chitty Chitty Bang Bang.

Here is the plot, roughly.

An astronaut chappie misses the bus back to earth after staying too long in the Star Wars bar watching the other worlds cup.

He survives on pure science and by growing maris piper in poo which is standard around here.

In the end he is rescued by the application of physics genius and simple logic although he does not have pointy ears.

If you own a latest generation Volvo you are over qualified to be this astronaut.

Our favourite Martian finally gets rescued by making a cross-crater journey in a rover. Not an actual Rover because there is no breakdown cover on the majority of uninhabited planets.

If he had been able to lay his hands on a Volvo V90 Cross Country the trek to rescue rendezvous would have taken a fraction of the time it did but our intrepid spaceman would have had to come to terms with more than just the technology needed to grow a few spuds.

The V90 has features at the cutting edge of design.

All Volvos are equipped with kit to keep you and those around you safe. Automatic braking and pedestrian sensors are taken as everyday items on the entire range but the Cross Country adds something called Pilot Assist which can take over steering and pedal operation to keep you on the road and away from the car in front.

Because this is a proper and able off-roader there is a control setting which senses when you are in the rough and adapts the car accordingly, holding gears for longer.

There is also automatic hill decent which kicks in when the car reaches a summit.

This car was in Inscription trim which is about as much luxury as anyone has a right to ask for.

On the subject of safety, if you are off the black top there is large animal detection equipment which will help you avoid things like deer and other wildlife.

Hide finish abounds, quality stuff not Third World shoe leather. Like all the latest Volvos the facia is dominated by a portrait Sensus touchscreen while the Inscription differed from lesser beings by replacing traditional instruments with a 12.5-inch digital set.

If there is anything to wish for it is more than just one USB port up front and AppleCarplaywhich does not cost an extra £300.

As we have come to understand the Sensus system is almost an auto pilot managing everything from the sat nav to air conditioning but you need to keep some screen wipes handy for grubby fingerprint removal.

I struggled a bit with the navigator so if anyone is passing Mars this week I'm in the Olympus Mons car park with a bag of organic new potatoes.

Clearly the idea is not to chose this model simply for searching out dried up canals so it is good to know that on the highway it is a joy, riding a little higher than the standard car and more responsive than the XC90 to which the yummies will still flock.

The two-litre supercharged petrol T6 may be thirsty with real-time consumption below 30mpg but its performance is the stuff of escape velocity via an eight-speed automatic gearbox.

Just 6.3 seconds elapse before 62mph is reached and the whole 316bhp experience is one of smoothness and comfort which it should be for £50,555 and a good tax slapping.

This is truly one of the large estates but feels less bulky to manoeuvre than the XC.

There is 560-litres of boot which surprisingly is not the best in class. It is easy to use with the seats down and with them up there is no shortage of passenger space.

Twenty years ago the V90 would have been worthy of its very own science fiction film. Today the advance towards autonomy is just taken as fact.

Would I buy one? Yes, at the drop of a space helmet. 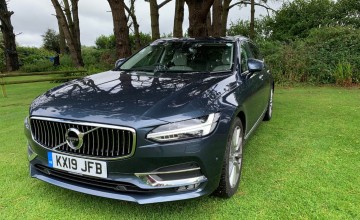 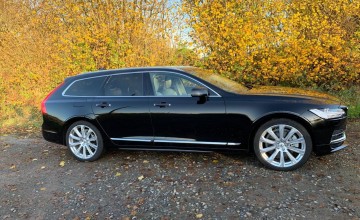