By Peter Keenan on 2018-07-29 - Peter has been with the Birmingham Post & Mail since 1990 and took on the role as motoring correspondent in 2007. He has been part of the Driving Force team for more than 10 years and his reviews are used nationwide by Trinity Mirror publications. 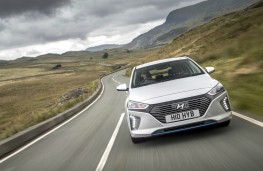 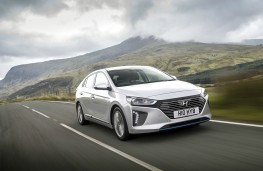 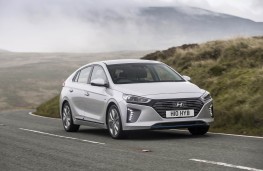 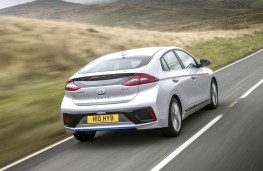 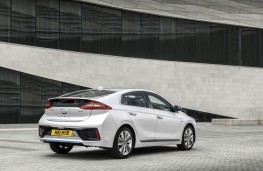 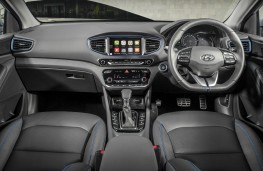 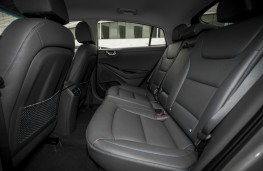 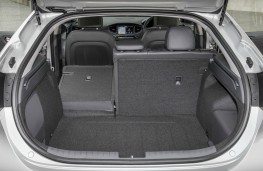 THERE are many great environmental reasons for choosing a hybrid - but I found another 55.9 excellent economic ones given current rising fuel prices.

No, that figure is not a slip of the laptop keyboard, rather it is the crucial number displayed on the instrument panel of the Hyundai Ioniq that gave the wallet-friendly miles per gallon figure I recorded after some mixed motoring with the Koreans' sleek, well-priced rival to the Toyota Prius.

Yes, Hyundai's official fuel economy figure for the Ioniq is in excess of 70mpg, but the real motoring world nearly always plays havoc with best-case calculations and tax-reducing carbon dioxide emissions of 92g/km are spot on.

The petrol-electric hybrid power unit, linked to a slick six-speed automatic gearbox, is one of three versions of the Ioniq - the other two being a plug-in hybrid and an all-electric car.

The hybrid combines a four-cylinder petrol engine and an electric motor to produce 139bhp in a refined, fuel-efficient package that is nippy away from the lights and able to cruise easily at motorway speeds.

When you brake the energy is used to help recharge the battery and there are natty displays on the dashboard that indicate which bit is doing what at any given time.

The five-door Ioniq is a relaxing drive with the Premium SE model offering powered seat adjustment and a steering wheel that can be moved to suit. The ride is smooth with most humps and hollows being catered for while the handling is reasonably sure-footed - despite a touch of body roll.

A variety of electronic safety gadgets are included. Most you won't notice but one you will is the lane departure warning which puts resistance into the steering wheel and sounds an alert if it detects you are drifting. There is also a blind spot detection system that makes its presence felt and a rear cross traffic alert.

The Ioniq is pleasing on the eye with a curving roofline and a stylish face - featuring a grille with gloss black plus chrome inserts - and a rear boasting a spoiler with integrated LED brake light.

The back of the car looks great from the outside, but unfortunately the spoiler acts like a bar across the rear windscreen hindering the driver's vision.

Side body mouldings give the car road presence while body-coloured door mirrors and chrome effect exterior door handles as well as alloy wheels and an aerodynamic shape give everything a suitably modern feel.

The interior is a pleasant place to spend a journey thanks to dual-zone climate control with vents in the back giving rear-seat passengers control of airflow, as wells as comfortable seats which are heated and ventilated up front.

There's a reasonable amount of head and leg room for two adults in the back of the car with a nice touch being a drop down tray between them containing two cup holders.

Hyundai is never shy about packing their cars full of goodies and the Ioniq is no different with Premium SE models getting plenty of kit including parking sensors and a reversing camera as standard.

Star of the show is an eight-inch touchscreen infotainment system with sat-nav, Android Auto and Apple CarPlay to hook up your smartphone.

Practicality is assured thanks to Hyundai's engineers locating the batteries beneath the rear seats rather than under the boot floor. Thus a spacious 443-litre boot is provided as well as a number of cubby holes - including a covered storage box between the driver and front-seat passenger - and a glove box.

The rear storage area can be expanded to 1,505 litres as the rear seats fold over, but not flat. 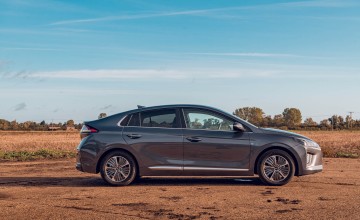 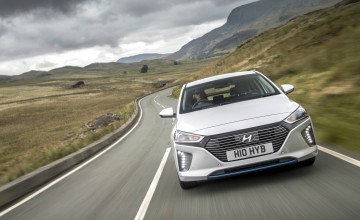