By Chris Russon on 2018-07-30 - The driving force behind Eurekar. Chris heads up a team of motoring correspondents under the Driving Force banner. Prior to Driving Force becoming independent in 2010 he was Chief Motoring Editor for Trinity Mirror Regional newspapers. Chris has been writing about cars for almost 40 years. 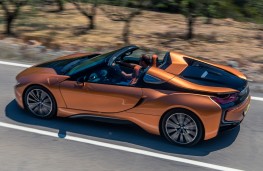 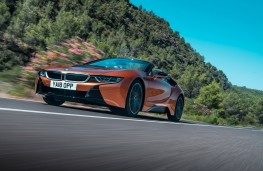 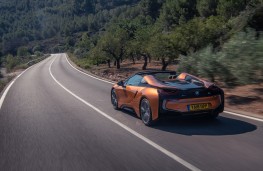 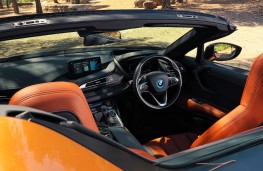 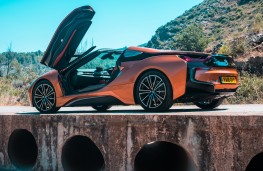 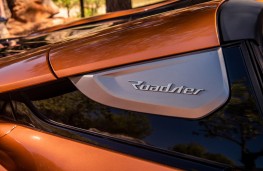 BMW has taken the wraps off its new i8 Roadster - the open top version of the thinking driver's supercar.

The i8 Roadster comes with a fabric roof which can be opened and closed at speeds of up to 31mph and at 15 seconds for the process is the fastest retractable hood in the BMW range.

Like the latest coupe, the open top i8 is powered by a 1.5-litre petrol engine mated to an electric motor with a battery cell capacity uprated to 34Ah from 20Ah on the original models.

The result is a zero emission range of up to 33 miles running purely on electricity.

Combined, the two power sources give the i8 Roadster a total output of 374hp which is good enough to accelerate from 0 to 60 in 4.6 seconds - just shy of the 4.4 seconds of the coupe.

Both models have a top speed of restricted to 155mph and the official fuel return for the roadster is rated at 141.2mpg with emissions of 46g/km.

In real world driving BMW says the car should be capable of averaging around 40 to the gallon or up to mid-50s on a commute - a figure the car maker claims is 50 per cent better than most other supercars.

A multi-mode drive pattern allows the car to be switched into a pure EV mode at speeds of up to 75mph with the petrol engine cutting in only under harsh acceleration or when the battery is nearing empty.

Recharging can be done in under three hours from a BMW wallbox or in some four-and-a-half hours from a domestic supply.

As well as a fabric roof, which stows in a perpendicular position in the rear when open leaving an extra 100 litres of space between the roof box and the seats, the roadster has an 88 litre boot with more cargo space available under the bonnet.

The roadster retains dihedral doors which open forwards and upwards while airflow has been altered at the front of the car to help maintain cabin temperature when travelling with the roof open.

Other features carried forward from the coupe on to the roadster include the availability of BMW's laser headlights with a beam range of up to 600 metres - double that of the standard LED lamps - and an acoustic warning system which alerts pedestrians when the vehicle is being driven at low speeds in electric mode. 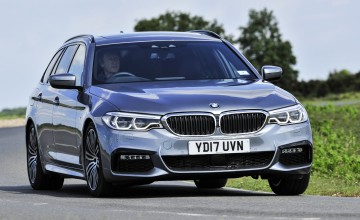 THE current tsunami of SUV and crossover vehicles tends to obscure the fact...

BMW clearly intends its new Z4 roadster to feel much more sporting than the...

THERE's no denying that by estate standards the BMW 5-Series Touring is easy on...