By Ian Donaldson on 2018-07-30 - Ian estimates he has driven more than 6,000 cars (so far) in a road testing career that's taken him around the world. He has spent several years as a full-time staff motoring editor and is now a busy freelance journalist

THERE'S something missing on the latest Kia, although you may hardly notice. Or indeed care.

Especially as it's all about the way the name is presented, with the over complicated and now former c'eed becoming simply Ceed.

It's the sort of thing that bothers car makers rather more than the folk who buy their product, but from now on it's simply Ceed - as in a car for the Community of Europe, with European Design.

There, knew you weren't much bothered. You may, however, care about the newcomer itself, latest version of a car that has been a solid seller for the brand since they started to appear from Kia's factory in Slovakia in 2006.

This new one looks a lot like the old one (no bad thing) but sharpened up all round and a little bit wider but lower for a more athletic look.

More practically, the result is a bigger boot (now 395 litres) and more shoulder room for rear seat passengers in this five-door hatchback, which continues to offer enough space for a growing family and their luggage.

The dashboard looks more upmarket and modern while, thankfully, keeping enough old fashioned buttons to make life for the driver both more convenient and safer than relying too much on the finger dabs and swipes on a touchscreen.

Under the bonnet sit a choice of three engines, two petrol and one diesel. Leading the petrol charge is an undated version of the existing 1.0-litre with 118bhp. More power is available from a new 1.4-litre petrol unit which replaces the old and larger 1.6 and with 138bhp on tap is actually modestly more potent.

It's also usefully economical, with 48.7mpg on the new official test and 132g/km of emissions.

Showing there's life in diesels yet, your Ceed can have a new 1.6-litre 114bhp powerplant on board. It's 99g/km emissions figure will be a temptation to people buying a new Ceed for business use and so will its 74.3mpg official economy boast.

As standard all three engines are mated to a crisp-changing six-speed manual gearbox; a seven-speed auto is an option on the diesel and 1.4 petrol variants.

Eking our every last drop of fuel, Ceeds with a new ECO pack slip through the air more easily thanks to a flap that blanks out the radiator grille when there is no need for total engine cooling and lowered suspension and an underbody cover help too. So too do special tyres that take less effort to roll along the road.

The newcomer is available in four grades, starting with ‘2' and moving through Blue Edition and ‘3' to top out with the bells and whistles First Edition.

A suite of safety additions include blind spot collision warning and forward collision avoidance that recognises if you close too quickly on a vehicle or pedestrian and will start braking if you don't.

Kia pointed us towards the Tatra mountains in Slovakia on the Ceed's launch with the new 1.6 diesel initially doing the hard work.

It didn't take many kilometres to appreciate the car's newfound quietness or a ride that smoothly laughed off the odd bit of Slovakian road surface that was't spirit level flat.

There was compensation of a sort in an end of trip economy readout of 55.1mpg and you sensed that would impress still more on less mountainous journeys.

Turning to the new Ceed, but with the new 1.4 petrol engine aboard, produced a car transformed, with more immediate performance on tap and a more confident feel on the corners. This time the 8.6 seconds to 62mph felt briskly correct.

Even hampered on the economy front by an (optional) automatic gearbox, the car made a compelling case for petrol with 54.5mpg on the trip readout. It's the one to choose this time unless you absolutely need to wring out every last drop of fuel. 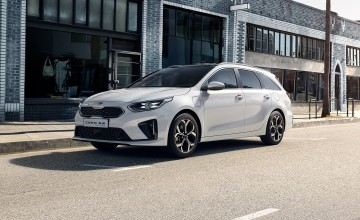 TWO new low emission models are joining the Kia range with the arrival of... 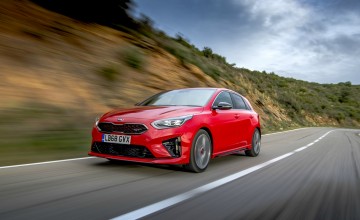 AT a time when family-focused SUVs are increasingly dominating our roads the...