By David Whinyates on 2018-08-01 - David is one of the UK’s most experienced motoring writers and was instrumental in setting up the Driving Force syndication service for Britain’s biggest regional newspaper group. Former Chief Motoring Editor of Trinity Mirror Regionals, he is Driving Force’s Consultant Motoring Editor and a director of Driving Force Media Ltd. 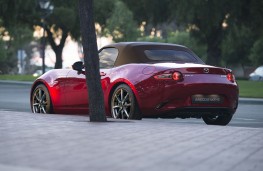 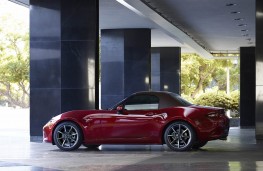 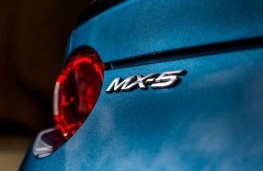 AN upgraded version of the iconic Mazda MX-5 is on the way with a more powerful engine, upgraded safety technologies and refinements in the cockpit.

But as far as styling is concerned, Mazda has adopted an ‘if-it-ain't-broke-don't-fix-it' ethos and the 2019 version of the car which won the World Car Design of the Year accolade on its debut will only be identifiable by new designs of alloy wheels.

The idea of the upgrade, says Mazda, is simply to enhance the driving experience "to ensure it‘s more exciting and engaging to drive than ever before."

At the forefront of what is basically a technical upgrade is a more powerful and higher-revving version of the Japanese maker's two-litre SKYACTIV-G engine.

The end result is an increase from 160ps to 184ps and a heightened redline, which rises from 6,800 to 7,500rpm and with higher fuel pressure and more efficient combustion, there's an increase in torque across the rev range, while peak torque rises by 5Nm.

The more powerful new engine shaves almost a second off the 0-62mph sprint time of the convertible which is now achieved in 6.5seconds, while manual and automatic RF models see a 0.6 and 0.5 second increase, respectively.

Meanwhile, the smaller 1.5-litre SKYACTIV-G engine benefits from improved combustion and reduced internal friction to see a slight power increase to 132ps and a moderate torque improvement to 152Nm.

The latest models will also come with telescopic steering adjustment and improved seat sliding operation and the level of standard-fit safety equipment has been boosted with Sport Nav+ cars and above now featuring front and rear smart city brake support, lane departure warning system, traffic sign recognition and driver attention alert, while a blind spot monitoring system with rear cross traffic alert, adaptive LED headlights and a reversing camera are standard on GT Sport Nav+ and optional as a safety pack on the Sport Nav+.

All models with the 1.5 litre engine go on sale on September 1 alongside two-litre hard top and convertible models in the new range-topping GT Sport Nav+ trim with two-litre SE-L Nav+ and Sport Nav+ following them into showrooms later in the Autumn.