By David Whinyates on 2018-09-13 - David is one of the UK’s most experienced motoring writers and was instrumental in setting up the Driving Force syndication service for Britain’s biggest regional newspaper group. Former Chief Motoring Editor of Trinity Mirror Regionals, he is Driving Force’s Consultant Motoring Editor and a director of Driving Force Media Ltd. 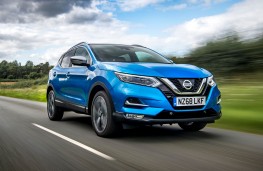 NISSAN has added extra appeal to its hugely popular Qashqai with the launch of an upgraded 1.5-litre diesel engine which is capable of providing up to a claimed 74.3mpg.

The enhanced 113bhp unit offers almost five more bhp of power over the previous generation of the oil-burner. Torque remains the same at 260 Nm, though the engine now features an all-new overboost function which delivers power and torque for up to 15 seconds of driving.

More than 90 per cent of the engine's components have been modified to deliver the improvements, including the oil cooler module, oil filter, dual mass flywheel, vacuum pump and high-pressure fuel pump.

However, there's a small environmental price to pay for the improvements. CO emissions increase from 99 to 100 g/km but fuel consumption on models fitted with 16 or 17 inch wheels remains the same at 74.3mpg combined.

Jean-Philippe Roux, general manager, crossovers, Nissan Europe, commented: "The upgrades to the 1.5-litre engine in the Nissan Qashqai further enhance its performance on the road and its appeal to consumers."

The Qashqai is the most successful model in Europe in Nissan's 83-year history, with approximately 2.3 million sold since the original version was launched in 2007.