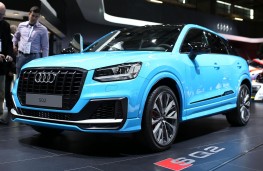 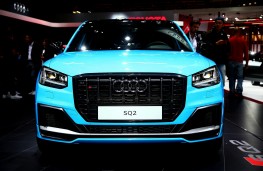 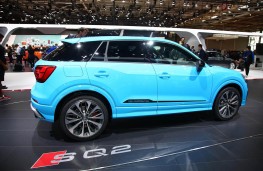 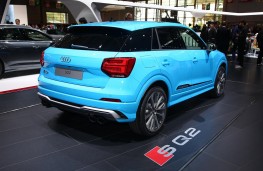 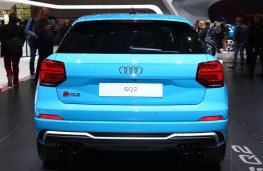 WITH 295bhp on tap, a 0-60mph sprint time of less than 4.8 seconds and an electronically-limited top speed of 155mph, the new Audi SQ2 looks set to leave other compact SUVs trailing in its wake.

Audi describes its new, top-of-the-range, super-SUV - which made its debut at the Paris motor show - as "a titan in the compact SUV segment", and we see no reason to argue.

To cope with the blistering pace provided by the potent two litre, turbocharged petrol engine, it comes with lowered sports suspension, a dynamic handling system and quattro all-wheel-drive plus a raft of high-tech driver assistance systems.

The four-cylinder engine is redlined at 6,500 rpm but maximum torque of 295 lb/ft is delivered between 2,000 and 5,200 rpm. There's a seven-speed S-tronic, double-clutch auto transmission with sport or manual shift modes.

The standard Audi drive select dynamic handling system lets the driver choose between auto, comfort, dynamic, efficiency and individual profiles and manages the character of the steering, the gearbox and additional systems. A button allows the driver to set the electronic stabilisation control to off-road mode or turn it off entirely.

With the dynamic system in "efficiency" mode, the clutch disengages when coasting, allowing the SQ2 to freewheel, and the start-stop system shuts off the engine when speed drops to 4mph or less.

The exterior and interior styling have been honed to reflect the newcomer's sporting character. There's a restyled grille, a front splitter and two big air inlets at the front while the rear end is dominated by a roof edge spoiler and a diffuser with four exhaust tailpipes.There's a choice of ten different alloy wheel designs with 18-inchers fitted as standard and 19-inch wheels available as an option.

Standard equipment includes leather and fabric sport seats, a front centre armrest, automatic air conditioning, a sport multifunction steering wheel - optionally with paddles for the S tronic version - and a driver information system with colour display. Audi's virtual cockpit with a 12.3 inch digital instrument cluster display controlled by buttons on the wheel is available as an option, as is a head-up display.

Prices have yet to be confirmed, but Audi dealers will start taking orders later this year with first UK deliveries slated for early in 2019.