By Ian Donaldson on 2018-10-06 - Ian estimates he has driven more than 6,000 cars (so far) in a road testing career that's taken him around the world. He has spent several years as a full-time staff motoring editor and is now a busy freelance journalist

THE smartly styled V40 hatchback is now comfortably the oldest design in Volvo's current range and has been a reliably steady seller since it first appeared six years ago.

So steady indeed that driving one for a week soon has you noticing just how many of them seemed to be coming the other way - a sure sign that thousands of Brits have realised what a solid buy the V40 represents.

Today's Volvo range highlights the rocket-like rise of the SUV since the hatchback V40 was introduced but there remains a solid core of buyers who simply don't fancy the taller riding style of a pseudo off-roader.

If the lower roofline of the V40 speaks of a more reticent approach to the world of personal transport you'd be right. Here's a car that like to speak softly and simply get on with the job.

So, the outside is smart yet quietly spoken and the interior is modest almost to the point of shyness, with everything where it ought to be and everything well put together, in a calmly rational sort of way.

The result is a car that will take driver and passengers in some comfort a very long way without any of them needing to remark every few miles what an interesting car this is.

For the non-enthusiasts among us (don't feel ashamed to hold your hand up) that represents a near ideal way to get about; in a car that does your bidding without drawing attention to itself.

It means that with a diesel engine doing the work there's a certain 500 miles in every tankful and a dashboard readout of 56mpg after a week of testing duties, taking in lots of motorway miles and enough town work to be glad of the automatic gearbox.

You might notice a cold start gruffness to the engine, which never entirely vanishes when things warm through and a surprising firmness to the ride on rougher roads but the V40 is mostly a forgettable performer - in the nicest possible way.

The V40 range starts at £21,410 and tops out at £30,485 and takes in diesel and petrol versions and the choice of manual or automatic gearboxes. The test car came in R-Design form, Volvo's way of telling you it looks a bit more athletic than regular V40s with the added visual sportiness that British buyers like.

Not that it drives in a sporty fashion (thank goodness?) and instead concentrates on taking the strain out of everyday motoring.

One way it does this is by making systems like the sat nav easy to use and leaving buttons to adjust the two-zone climate control instead of having you jab a touchscreen.

Actually, more modernly designed Volvos demand you do just that - so the relative age of the V40 acts in its favour here. 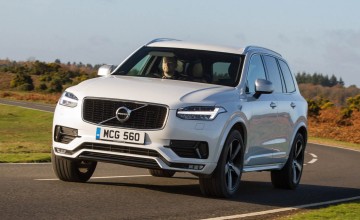 JAMES BOND may have preferred his Martinis to be ‘shaken not stirred' but the...