By David Whinyates on 2018-10-09 - David is one of the UK’s most experienced motoring writers and was instrumental in setting up the Driving Force syndication service for Britain’s biggest regional newspaper group. Former Chief Motoring Editor of Trinity Mirror Regionals, he is Driving Force’s Consultant Motoring Editor and a director of Driving Force Media Ltd. 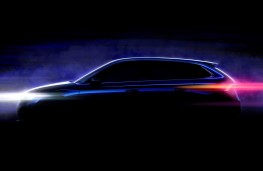 THIS is Skoda's vision of the future - a brand new compact hatchback with which the Czech maker plans a serious assault on a market currently dominated by the Ford Focus and Vauxhall Astra.

Sitting above the Fabia, but smaller than the Octavia, it is expected to replace the current Rapid Spaceback model and is the company's first model to be built on the latest Volkswagen Group compact platform which already underpins the VW T-Roc SUV.

The newcomer is currently being called the Spaceback in a nod to the car it will eventually replace, but it's not known whether that will be the badge on the boot when it goes on sale.

The silhouette photo released by Skoda doesn't reveal much other than the fact that the new car will have five doors, but the company says that the styling marks the next development in its design language and that it translates the styling of its Vision RS concept, recently shown at the Paris motor show, into a production vehicle.

Skoda promises a "distinctive and dynamic" design with generous interior space along with numerous, innovative assistance systems. More details will doubtless emerge ahead of the car's public debut before the end of the year.

AFTER the runaway success of its range of SUV models Skoda has taken a step in...

THE appeal of an SUV tends to be in the space it can offer alongside its height...