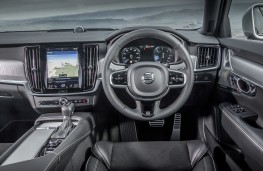 IT'S old news that Volvo estates are no longer the territory of pipe-smoking, Labrador-owning middle-class accountants.

But the idea that a car big enough to carry a Welsh dresser and a ton of luggage in its boot could be cool is definitely stretching the imagination.

Think again, my friend. Today's V90 - that's the name of the estate version of Volvo's biggest saloon - isn't only belting to look at but it drives and handles more like a sports car than many actual sports cars.

So forget antique dealers, bearded vegetarians and Labradors too - although some owners still own the delightful dogs - and think lifestyle, trendy and take on board the fact that this is a very real alternative to the prestigious offerings from BMW, Audi and Mercedes.

The version I've been driving is the rather laboriously named V90 D5 PowerPulse AWD R-Design Auto. Yes, a mouthful but it basically means it's a diesel with four-wheel-drive and automatic gearbox in a racy looking body.

At first glance you tend to think the sleek, low-riding V90 is a tad too sporty looking to accommodate the family clutter but scan the stats and you realise with rear seats in place there's 560 litres of boot space - that stands comparison with most rivals. Fold them down and this becomes a massive 1,526 litres.

The driving compartment is smart, businesslike and classy with an individual interpretation on fascia design that's likely to appeal to most drivers.

A large iPad style touchscreen in the centre is bold quite easy to operate, although the swipe motion is best made at standstill because it needs a steady hand not one jolted by car movements.

High quality plastic mouldings and carbon fibre inlays lend a sporty but luxury note to the cabin as do the superbly comfortable Nappa leather covered seats (with electric controls and memory function, a £700 option).

The Volvo's combination of fluid, roll-free handling and nicely weighted steering together with enough power for swift overtaking - 0-62mph in just over seven seconds - makes it a superb long distance companion.

Add to this a natural composure that means the ride is rarely unsettled and very little noise disturbance either from mechanical sources or from wind intrusion and you have an impressive combination of talents. It is among the quietest estates available irrespective of price.

I was expecting my economy to average around the low to mid 40s, so was a bit disappointed to find 38mpg to be my best result. I have to confess to making the most of the ample torque and using the Dynamic drive setting mostly rather than Eco, but nevertheless. 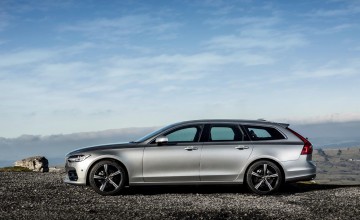 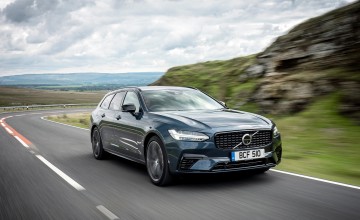 IF producing plug-in hybrids is often seen as a stepping stone to full electric...