By Ian Donaldson on 2018-11-26 - Ian estimates he has driven more than 6,000 cars (so far) in a road testing career that's taken him around the world. He has spent several years as a full-time staff motoring editor and is now a busy freelance journalist

IF you fancy a new Suzuki Jimny don't waste time comparing it to the competition - there isn't any. Really.

If you want an affordable, no nonsense 4x4 that will take you just about anywhere and come up smiling it's the Jimny or nothing.

A Jeep Wrangler does the same back-to-basics job but is much bigger and twice the £17,999 asked for the dearer - and likely much the bigger selling - of the two new Jimny models.

And Land Rover's upcoming Defender, coincidentally spied in heavy disguise on roads used for the new Suzuki's debut, will be dearer still, for sure.

So it's little surprise that the world has beaten a path to Suzuki's door, creating waiting lists stretching months into the future.

In the UK alone, 10,000 people have shown a continuing interest on Suzuki's website, while the company expects to have a mere 600 cars to sell in the first half of 2019.

Seldom has such a niche machine created such a swell of interest and seeing your first new Jimny in the metal will only encourage more kerbside adulation.

It looks terrific in its slab sided frills-free way, small but perfectly formed and quite obviously a modern interpretation of the third generation Jimny that pulled in buyers over two decades.

The newcomer is actually a little (30mm) shorter but 45mm wider and 20mm higher than before and remains a properly compact car. That has consequences, good and not so good.

Modest dimensions and weight make it a star off-road, romping easily over the slipperiest of ground on normal road tyres where a heavier 4x4 might simply bog down and quit.

Solid axles front and rear and a low range transfer gear with four-wheel drive further ram home the Jimny's solid go anywhere credentials. So does a body frame stiffer than before, and hill descent control.

Downside of those compact measurements is a cabin that's properly snug for four, with shoulder width at a premium and a boot that is - literally - almost non-existent with the rear seats in place. If you fancy a Jimny you'd simply call it snug inside.

The new version has a 1.5-litre petrol engine in place of 1.3-litres but it remains firmly unturbo-ed and of modest output; using but 100bhp to propel its modest mass to a 90mph top speed.

Small it may be but the new engine's CO2 output of 176g/km means a hefty £515 wallop on first year car tax, with some compensation from the 41.5mpg official average economy figure - and almost matched in the real world on test.

A less than stellar three star rating in the Euro NCAP safety test won't impress family focused drivers who may take some consolation in the standard fitment of lane departure warning and automatic braking if the car detects danger ahead and the driver doesn't react.

The new and dearer Jimny is well equipped in top trim level, with standard kit ranging from cruise control and automatic air conditioning to DAB radio and satellite navigation.

Add in heated front seats, auto headlight dip, heated door mirrors and 15in alloy wheels and the fuller bottom line looks perfectly reasonable, especially in light of the expense of making this a proper off-roader.

On road you'll discover a car with modest performance and you'll soon be looking for a sixth gear that isn't there, making progress buzzier than you'd hope for.

The ride, on the other hand, exceeded expectations, with a surprising ability to absorb the bumps.

Not bad off road either, where the little Jimny comes into its element. If it's your sort of car, form an orderly queue. 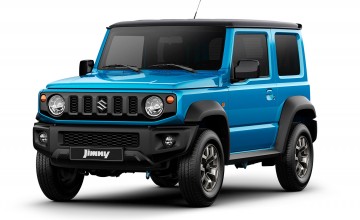 CHEAP, cheerful, chunky and looking like a baby Merc G-Wagen, this is the all... 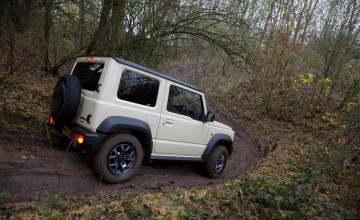 GREAT to look at, brilliant off-road and much better on Tarmac the new fourth...