A SECOND generation version of Kia's funky, zero emissions, Soul EV is on the way next year with fresh styling and, more importantly, a new, cutting-edge liquid-cooled lithium-ion polymer 64 kWh battery pack which will provide a vastly improved range over the outgoing model.

Unveiled at the Los Angeles auto show, the new model is unlikely to arrive in the UK until the second half of next year but testing is already underway to determine its estimated range.

However, the same battery pack is already available in the Korean company's e-Niro electric small SUV in which it offers a range of more than 300 miles on a single charge - significantly more than the 132 miles of the current Soul EV.

The new battery pack will also provide improved acceleration with almost double the available power - 201bhp compared with 109 - and significantly more torque which goes up from 285 to 395 Nm.

Handling and driving dynamics should also be much improved, thanks to the adoption of new fully-independent rear suspension.

The Soul EV's smart regenerative braking system is operated via paddle shifters behind the steering wheel, providing drivers with the ability to slow the car and capture more kinetic energy with three levels of regeneration available. The system also features a ‘Brake and Hold' facility, which enables drivers to use the paddle shifters to bring the car to a full stop while harvesting kinetic energy.

The new model boasts an all-new exterior design but stays true to the car's boxy origins. A new look front end now features a "grille" running the width of the car - Kia calls it a ‘brow' - into narrow LED headlamps.

A restyled, deep front bumper now incorporates the charging point which was previously located in the Soul EV's blanked off radiator grille while at the back there's also a new bumper and lighting array.

Interior refinements include an infotainment system based on a 10.25-inch colour touchscreen with rear-view monitor and parking guidance and a full suite of advanced driver assistance and safety systems will be available.

Amongst them is a revamped telematics system, which, as well as allowing owners to monitor and control a variety of vehicle operations, includes a "panic" alarm which will dial emergency services, provide the car's position via GPS and open a live microphone so that emergency workers can communicate with vehicle occupants.

Full UK specs and pricing are unlikely to be announced until next summer, but given the more powerful 64kWh drive train, expect the new Soul EV to cost from around Â£33,000 before the Government's electric vehicle grant - compared with the Â£30,495 asking price of the current 30kWh model. 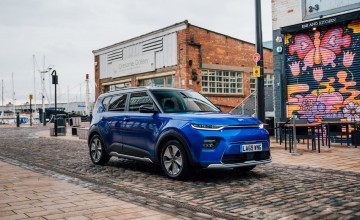