No Deal Brexit would

By Chris Russon on 2018-12-20 - The driving force behind Eurekar. Chris heads up a team of motoring correspondents under the Driving Force banner. Prior to Driving Force becoming independent in 2010 he was Chief Motoring Editor for Trinity Mirror Regional newspapers. Chris has been writing about cars for almost 40 years. 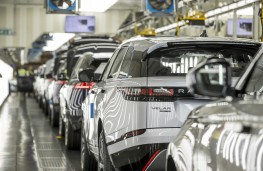 A NO Deal to Brexit would see Britain's automotive industry grind to a halt, a leading trade body has warned.

The start statement from the Society of Motor Manufacturers and Traders says a No Deal option must be taken off the table.

It says auto businesses are exasperated by the current situation and leaving the EU without a deal would undermine an industry that employs some 186,000 people and has an annual turnover of Â£82 billion accounting for 12.8 per cent of the UK's exports.

"It is the responsibility of all politicians to rule out No Deal and all effort should be focused instead on delivering a deal that provides for a status quo transition and a future relationship with the EU that has frictionless trade at its heart," said the SMMT.

Any border delays would fundamentally kill off just-in-time manufacturing stopping production and tariffs would add at least £4.5 billion to industry costs.

Mike Hawes, SMMT chief executive said: "As UK motor companies are being told to prepare for a No Deal Brexit, the long-standing fears of the industry are becoming a reality.

"Brexit is already having an impact - in output, costs and jobs. But this does not compare with the catastrophic consequences of leaving the EU without a deal. The just-in-time nature of automotive means the impact of No Deal will be felt, not in months or days, but hours.

"There is no such thing as a ‘managed' No Deal. We would face immediate delivery shortages, additional costs and uncertainty, which will seriously damage our sector. Both government and parliament have a responsibility to take this option off the table or risk destroying this vital UK industry."

The trade body said that the auto supply chain works on a just-in-time basis, with the arrival of parts at plants timed to the minute, not the day or the week.

Border chaos caused by a No Deal scenario would render this process impossible with warehousing not a viable option given the scale of production, the complexity of the product, the space needed and the lack of immediate availability.

Furthermore, the hundreds of small companies across the domestic supply chain - the backbone of the industry which employ some 856,000 workers - are unlikely to have the time or resources to prepare for the changes to their trading conditions.

Since 2010, UK car production has risen by a third, with 80 per cent bound for export, the majority to the EU.

Around 2.7 million new cars are traded between the UK and EU each year, while the UK exports some £3.4 billion worth of components to help build vehicles across Europe.

UK plants source almost three times that sum from EU-based suppliers with over 1,100 trucks crossing into the UK every day delivering some £34 million worth of parts.

"This success has been dependent on free and frictionless trade afforded by the single market and customs union," adds the SMMT. "A no-deal Brexit threatens the viability and, therefore, the future of this critical UK sector."