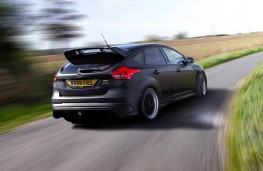 OWNERS of Ford Focus RS models are being offered extra performance from their cars with two new tuning kits from Mountune.

The Essex-based company, which has been developing performance tweaks for Ford models for almost 40 years, has released its m400R and m400X packages for the third generation RS.

The m400R supersedes the m400 upgrade, adding additional maps and increased functionality while the m400X is for owners wanting to extract the last bits of performance from their car's 2.3-litre EcoBoost engine, while retaining the standard turbocharger.

The kits cost Â£595 and the m400R upgrade is being offered free to those who already have Mountune's m400 technology on their RS.

David Moore, director of Mountune Performance, said: "The Focus RS is a fantastic vehicle to drive and the platform responds extremely well to our performance upgrades.

"With these two kits the power and torque are now exceptional both in quantity and delivery. This is particularly true of m400X which turns the RS into something truly phenomenal."

The m400R package takes the peak power and torque of the RS to 400psS and 560Nm, respectively. It also includes a number of alternative calibrations to provide drivers with increased usability and introduces two not previously seen in the m400.

The m400X builds on the m400R and takes the performance of the RS to another level, substantially increasing the area under both power and torque curves. As a result, the pick-up, response and mid-range are all dramatically transformed.