By David Whinyates on 2019-02-11 - David is one of the UK’s most experienced motoring writers and was instrumental in setting up the Driving Force syndication service for Britain’s biggest regional newspaper group. Former Chief Motoring Editor of Trinity Mirror Regionals, he is Driving Force’s Consultant Motoring Editor and a director of Driving Force Media Ltd.

TO hybrid or not to hybrid? That's the question facing an increasing number of drivers as pressure grows to go down a greener road when choosing a new car.

Hybrids have been around for some time now and their numbers are growing. The latest on the scene comes from Honda in the shape of the new CR-V Hybrid.

The latest - and much improved - CR-V now gives you the choice of pure petrol power in the shape of a 1.5 litre, 170bhp turbocharged engine or greener hybrid propulsion, with a two litre 143bhp petrol engine combined with two electric motors - one for power and one to regenerate the battery.

Hybrid models come with exactly the same trim levels and the choice of two or all-wheel-drive. But the latest technology costs, and there's a substantial premium to pay for the new, greener, hybrid versions of the CR-V.

So can you actually save money by investing extra hard-earned in a hybrid? I put both petrol and Hybrid versions of the new CR-V through a real-world, mixed driving test in an attempt to find out.

Over a 40 mile route taking in motorway, A-roads, rural lanes and town and village centres the Hybrid returned 51.7mpg compared with 41.5mpg for the petrol-engined CR-V, itself pretty impressive.

The comparison is, perhaps, slightly skewed by the fact that the 2WD petrol model is only available with a six speed manual box while the Hybrid comes with CVT auto but, even so, at around Â£300 a year, it's going to take a long time to get any pay-back on the initial price difference.

But, if going greener is more a matter of conscience than cash, the new CR-V Hybrid is an impressive piece of kit.

Electric drive will happily take you through town centres for just over a mile on battery power only and it's so quiet in action that there's an acoustic warning system to alert pedestrians should they stray into your path.

Out on the open road the system will shuttle seamlessly between hybrid and engine power, but at motorway speeds you'll mainly be using petrol power. That also applies if you need rapid mid-range acceleration - and the CR-V Hybrid has that in spades - although putting the pedal to the metal results in a significant increase in noise levels from the engine and CVT transmission system.

Visually there's no difference between the Hybrid and petrol versions of the CR-V other than discreet Hybrid badges on the wings and tailgate. Inside, however, the Hybrid has a remodelled fascia, with centre-console mounted selector switches for electric, economy and sport modes and for the auto transmission - there's no shift stick, just switches for Drive, Reverse, Neutral and Park.

The Hybrid also gets its own bespoke digital instrument cluster which features a graphic of the current power flow, indicating the vehicle's power source at any given moment, a battery charge status indicator and even an ‘ECO Guide' to suggest more efficient driving techniques.

It's all clever stuff, but for the rest the Hybrid shares all the plus-points of the latest generation CR-V. For that read an extremely spacious and beautifully-trimmed up-market interior, a host of clever comfort, convenience and safety features, excellent handling and a pliant and comfortable ride. 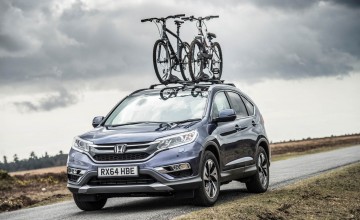