T-Roc on the way

VOLKSWAGEN's T-Roc is going all sporty with a newly developed high performance version due to be unveiled at the upcoming Geneva motor show.

VW has not revealed any significant details of the new T-Roc R, but says it has newly designed front and rear ends and has released a design sketch which gives plenty of clues to a more muscular, sporting and aggressive look.

The company says that the design excercise to be shown at Geneva in March is "a close-to-production concept car" and that the final production model will have "impressive performance data".

What's under the bonnet remains a mystery but it is likely to be a development of the 306bhp, two litre petrol turbo engine fitted in the Golf R which has a top speed of 155mph and 0-60mph acceleration of five seconds.

VW's motorsport-orientated Volkswagen R division has been in charge of engineering the T-Roc R and it has clearly undergone a lot of development work with input from WRX World Champion Petter Solberg and Volkswagen works driver Benjamin Leuchter and with fast laps of the legendary Nurburgring race track already under its belt. 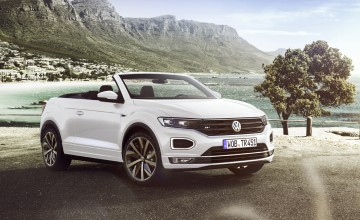 VW opens up with T-Roc Cabriolet

A CONVERTIBLE version of the Volkswagen T-Roc SUV is on the way and will have...