By Peter Keenan on 2019-02-17 - Peter has been with the Birmingham Post & Mail since 1990 and took on the role as motoring correspondent in 2007. He has been part of the Driving Force team for more than 10 years and his reviews are used nationwide by Trinity Mirror publications. 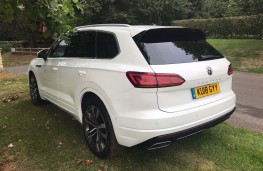 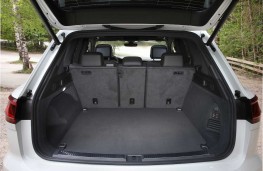 THE Volkswagen Touareg is a big bear of a motor - but unlike Baloo in the Jungle Book it offers far more than the bare necessities as it is packed with technology.

Once aboard the third generation of Volkswagen's SUV global flagship, you initially wonder where all the buttons have gone.

Well, in the top of the range R-Line Tech model they've been consumed by VW's ‘Innovision Cockpit' which offers what appears to be a huge central screen - it is actually two slabs of glass subtly divided behind the steering wheel - containing fancy digital dials next to a central infotainment package.

There is a 12-inch multi-mode instrument panel that merges with a 15-inch touchscreen in the centre of the dash that is angled towards the driver.

The system is smartphone friendly thanks to compatibility with both Android Auto and Apple CarPlay and features a WiFi hotspot so up to eight devices can be connected.

There are multiple menus to choose from - accessed either through steering-wheel mounted buttons or from the touchscreen - but the whole thing is simple to set up with more frequently used functions able to be brought to the forefront.

An optional head-up display was also featured here, but considering the excellence of the dials already doing the job I wonder if many will pay the £1,000-pus it costs.

Other tech options include ‘Night Vision' to detect humans and animals using a thermal imaging camera and 360-degree cameras. Indeed there is a raft of safety kit included to help keep you from harm while protecting all should an accident occur.

The cabin is a quality affair. Yes, if you want seven seats you will have to shop somewhere else, but VW make the most of the five-seat configuration - especially as the latest Touareg is bigger than the model it replaces.

There is plenty of room for five adults and if only two seats are needed in the rear the middle back rest drops down to provide an arm rest and handy cup holders. The rear doors also open wide making the sometimes onerous task of fitting child seats a cinch.

The boot is huge at 810 litres with the rear seats in place while folding everything flat creates a Grand Canyon-like space.

Top notch materials are used throughout with leather festooning the interior while high-quality plastics and bright splashes of chrome are pleasing on the eye.

The Touareg belies its size on the road being a surprisingly agile beast that handles well and largely avoids body roll thanks to the optional adaptive air suspension. It is a good performer off-road while those wanting to tow caravans will like its 3.5-tonne capacity.

The 3.0-litre V6 diesel uses its 286ps to propel this big SUV from 0-62mph in a shade over six seconds with the help of a slick eight-speed automatic gearbox which can also be controlled manually with paddle shifters flanking the steering wheel.

The power unit's fuel economy is rated at 42.8mpg with emissions of 173g/km and in a week of mixed motoring I wasn't far off that returning a figure in the high 30s.