By Ian Donaldson on 2019-03-04 - Ian estimates he has driven more than 6,000 cars (so far) in a road testing career that's taken him around the world. He has spent several years as a full-time staff motoring editor and is now a busy freelance journalist

MOST people who buy a new Volvo estate car are out to make a sensible choice, surely?

You know; something spacious, safe and comfortable. The sort of attributes that can be measured by tape, crash test or driver's bottom. And all very sensible.

Well, turns out that you'd be only partially right if you thought a relentless logic applied here. Turns out something as hard to judge as style counts greatly too.

Yes, Volvo thinks fully 45 per cent of people who buy one of its new V60 estates will take their car in R-Design trim, whose principal attraction over entry-level Momentum cars is sharper looks.

For those, buyers will happily find the £3,000 premium that brings lowered and stiffened suspension, bigger 18ins alloy wheels and bits of exterior trim in high gloss black.

More practical touches extend to front parking sensors and part-leather and sculpted sports seats, along with gearshift paddle changes in cars with automatic gears, but it's surely those racier looks the punters are after.

The R-Design option appears alongside a new Cross Country version, both additions to the existing V60 range that first appeared last year as Volvo's smallest estate and continuing a line of people and luggage carriers that for years defined the Swedish brand.

While the all-wheel drive V60 Cross Country is currently only available as a single £38,270 model with the more powerful D4 version of Volvo's 2.0-litre diesel engine and auto gears, the R-Design trim comes as an option with that engine and a lesser powered D3 along with manual gearbox choices too.

Most buyers will look towards one of the more economical diesels, tempted by prices that start at £35,410 for a V60 R-Design with 150hp engine and manual gears and with up to 55.4mpg average.

It brings a car capable of 127mph and 0-62mph in 9.9 seconds; figures which translate into plenty of performance in the real world, if hardly sporty in an R-Design sort of way.

For that you might head from D3 to D4 diesel and its 190 horsepower; enough for 137mph and 7.9 seconds to 62mph and a properly sporty push when provoked. You won't pay at the pumps - at least not officially - for this extra urge, with the D4 posting an identical 55.4mpg economy figure.

Emission figures for the R-Design range from 119g/km for a manual D4 to 160g/km for the more thirsty petrol T5. Joining the range later will be a petrol-electric hybrid, which produces a mighty 405hp in T8 Polestar Engineered guise.

But enough of performance, this is a Volvo after all and thoughts will inevitably turn to practicality, which is hardly lacking in this newcomer.

It may be Volvo's smallest estate sitting below the V90 but there's still plenty of room for people front and rear and a luggage area that varies from 529 to 1,441 litres with the rear seats up or folded. So, probably enough room for most growing families.

The tailgate is powered and there's handsfree opening (waggle a foot beneath the rear bumper) with the R-Design Pro spec that adds £2,250 to the price but also brings goodies like dark tinted windows, 19-inch alloys, powered driver's seat, heated front seats, head up display and active bending headlights - even heated wiper blades.

Save the upgrade's cost and you won't feel shortchanged in the 'mere' R-Design, with its heated steering wheel, satellite navigation on a big nine inch touchscreen, DAB radio and a host of safety systems - from road sign information display to the ability to slow the car if a vehicle is driving straight at you.

Mean, though, to ask £525 for heated front seats as part of a pack that also includes headlight cleaning and heated windscreen and a further £300 for Apple CarPlay and Android Auto integration when you'd expect both as standard, surely?

Out on the roads of a delightfully undiscovered Suffolk in winter, a manual version of the R-Design with more powerful D4 diesel doing the work proved mildly sporty in the way it headed for the horizon if encouraged.

The suspension felt a bit stiff and pattery to begin with but was soon forgotten as this biggish car seemed to shrink in size along the high hedged lanes on part of the route.

The abiding sensation - common to the entire current Volvo range - is a car designed by sensible people who know you'll want to enjoy your driving for years ahead - and long after that first initial thrill has worn off. And full marks for Volvo for that. 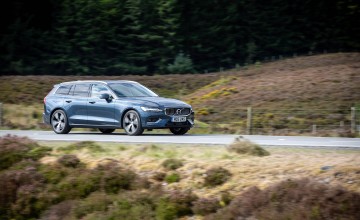 VOLVO'S V60 might be the smallest estate that the Swedish car maker now builds...