By Jon Smith on 2019-03-09 - Jon is a senior motoring journalist with a background writing for weekly/provincial daily and national newspapers and magazines. He has held executive news and features positions in Fleet Street and evening titles. Former Pirelli Motoring Writer of the Year winner. Currently specialising in product launches, safety issues, car tests and future motoring trends. 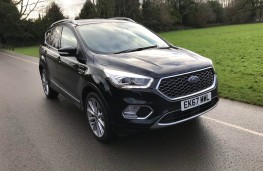 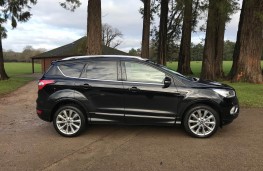 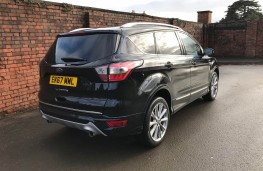 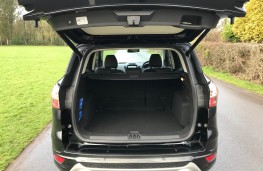 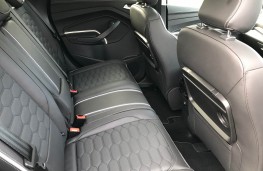 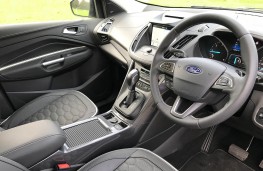 TWO things we Brits love about cars are SUVs and premium brands.

Put the two together, and what have you got? Answer the Ford Kuga Vignale. Well, that's what the marketing guys at the Blue Oval hope for anyway.

The top, all bells-and-whistles Kuga is tagged Vignale - after a famous coachbuilder of the 1950s and 60s - and is Ford's answer to the tide of crossovers and SUVs from prestige brands such as BMW, Audi, Volvo and Merc.

Facelifted more than a year ago, the flagship Kuga packs in just about every goody you could wish for ...quilted, leather seats, power tailgate, big touchscreen, adaptive headlights, all-wheel drive and heated seats. You also get a fancy grille so the poshest model in the line-up can be easily recognised, but a glass panoramic sunroof remains a £995 extra.

Beneath the skin, the Kuga is a spacious, well sorted family wagon with sound handling and a better than average ride that manages to be pleasing to drive as well as comfortable for a full complement of passengers and their luggage.

There's a choice of petrol and diesel engines plus an option of either manual or automatic. Most families are still plugging for the diesel - either 148bhp 2.0-litre or the gutsier 178bhp version - on the grounds of better economy.

Mine was the more powerful diesel and came with automatic gearbox - a good marriage that takes the strain out of traffic queues and town driving without diminishing performance.

While there's little to whinge about the handling and road holding of the high-riding Kuga, the diesel engine doesn't quite match the general refinement of the rest of the car. At start-up it's noticeable agricultural and even at cruising speed, despite plenty of soundproofing, it doesn't measure up some of the German rivals in terms of serenity.

It's best to avoid pushing engine revs towards the red if you want a restful journey, because it does start to get a bit harsh.

Performance itself is quite respectable if not outstanding - 62mph comes up in 10 seconds and max is 124mph. Reasonable torque allows decent mid-range grunt for overtaking and the six-speed automatic gearbox has well spaced ratios that make the most of the available power.

Most owners will average around the 40mpg mark without too much trouble. My best result was 45mpg over a long run with a worst of 36mpg in heavy traffic.

Vignale models are put through an extra 100 quality checks, so it unsurprising the fit and build quality is impressive. The cabin design, however, is looking somewhat staid and old school now, and there's too much hard plastic on view for a premium product.

No shortage of head or legroom in the five-seater Kuga and families are well catered for with plenty of cubbies, storage bins and fold-away table in the rear. The rear boot holds nearly 500 litres of cargo - a tad small than most rivals. The low lip and wide aperture make loading heavy items easy. 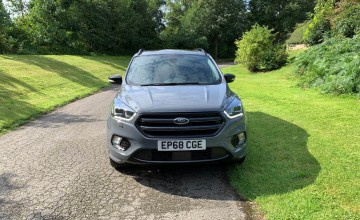