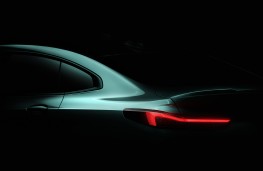 BMW is continuing a product offensive with the announcement it will be launching a 2 Series Gran Coupe later this year.

Joining the existing 4 and 6 Series models, the newcomer will have its world premier in November and is slated for release early in 2020.

Details of the new car are being kept under wraps at the moment but the company has released a teaser image showing a sloping rear end similar to that of the larger models.

The 2 Series Gran Coupe will be a front-wheel-drive four door model and BMW says it will share a number of technological developments with the new 1 Series which is also due to be revealed this year.

In the 2 Series line up it will sit alongside the regular model and its Active Tourer and Gran Tourer derivatives.

The car will make its debut at the Los Angeles Auto Show before its market launch beginning in the spring of next year.