By David Whinyates on 2019-03-21 - David is one of the UK’s most experienced motoring writers and was instrumental in setting up the Driving Force syndication service for Britain’s biggest regional newspaper group. Former Chief Motoring Editor of Trinity Mirror Regionals, he is Driving Force’s Consultant Motoring Editor and a director of Driving Force Media Ltd.

MANY new cars fitted with keyless entry and start could be easy prey for high-tech car thieves according to new research by the UK's leading safety and security testing organization.

Of eleven new cars launched so far this year which have keyless technology, six have been rated as being vulnerable to criminals using high tech equipment to intercept signals from the car's keyless fob.

And because of the increasing number of new keyless models, Thatcham Research has now launched security ratings to help consumers better understand the theft risk to their new cars against a back drop of rising vehicle thefts.

The new ratings assess whether the latest measures to specifically address the vulnerability of the keyless entry/start system, have been adopted.

Six of the 11 vehicles launched this year have been given a ‘Poor' rating as the keyless entry/start system they have as an option has no security measures to prevent theft by criminals using the so-called ‘Relay Attack' technique.

And one - the brand new and highly praised Suzuki Jimny - has been deemed as having "Unacceptable" security by the organisation's testers.

Says Richard Billyeald, chief technical officer at Thatcham Research: "We've seen too many examples of cars being stolen in seconds from driveways. Now, any vehicle that is assessed against the new Thatcham Research Security Rating, and has a vulnerable keyless entry/start system, will automatically not achieve the best rating."

"Security has come a long way since vehicle crime peaked in the early 1990s. But the layers of security added over the years count for nothing when they can be circumvented instantly by criminals using digital devices."

Billyeald adds: "Our guidance for worried drivers is first and foremost to understand if your vehicle has a keyless entry/start system or not, as it is often an optional extra. If it does, check whether there are solutions available with your key fob - can it be turned off overnight or does it go to sleep when not being used?

"Faraday shielding pouches can be effective but test them first to make sure they do block the signal. Many are designed for credit cards so make sure they still close fully with a set of keys inside, to ensure maximum effectiveness.

"Storing all sets of keys, spares included, away from household entry points is also important as it hampers the criminal's ability to relay the signal.

"And finally, it may in some cases be possible to turn the system off entirely, so it's worth checking with your dealer." 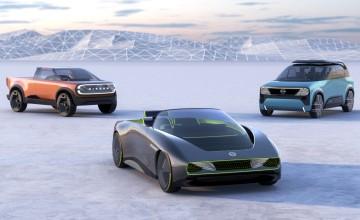 NISSAN has revealed its plans for the electric age announcing a huge investment...