By Ian Donaldson on 2019-05-06 - Ian estimates he has driven more than 6,000 cars (so far) in a road testing career that's taken him around the world. He has spent several years as a full-time staff motoring editor and is now a busy freelance journalist

YOU can't accuse the VW Group of bucking the SUV trend. Or not any more you can't.

After coming late to the realisation that the world wants to drive an SUV, the giant German conglomerate has been popping out new versions like peas from a pod.

Names like Q2, Q3, Q5, Q7, Arona, Ateca, Karoq, Kodiaq, Touareg, T-Roc, Bentayga and Urus now adorn the rump of cars from Audi to WW, with Bentley, Lamborghini and SEAT in between.

Now, joining the (slightly) larger T-Roc and much larger Touareg from the Volkswagen stable comes the small but perfectly formed T-Cross SUV, aimed at style conscious types and priced from an affordable £16,955.

Based on the VW Polo, it's a bit longer and quite a lot taller, in the typical SUV fashion that buyers love for the higher sight line, easier entry and exit and more assertive looks this style of car brings.

If you think it seems just a little 'generic VW SUV' in looks there are ways to make your T-Cross stand out... all the way to ticking the Energetic Orange paint option (£575) and equally Energetic Orange design pack with stand out wheels, mirror housing, darkened glass and interior trim (£630).

More practically, thanks in part to sitting more upright in the taller cabin, there's easily space in the second row for tall people to sit behind themselves (as it were) and the standard fitment of a sliding (by 14cms) rear bench means boot space can stretch between 385 and 455 litres with the seats up or a very generous 1,281 litres with them folded.

VW does not expect the T-Cross to sell in the same quantities as the mildly longer (by 126mm or nearly five inches) T-Roc SUV and is keeping the range simple, starting with the choice of engine.

For the moment it's the same 999cc three-cylinder turbo petrol unit with either 95 or 115 horsepower and driving the front wheels via either a five or six-speed manual gearbox or seven-speed DSG auto 'box.

You won't ever see an all-wheel drive version nor, probably never, a more powerful petrol engine. Surprisingly perhaps, there will be a 1.5 litre diesel option before the end of the year to cater for the tiny percentage of buyers seeking ultimate fuel economy.

Once past the pleasingly low entry level price point for the car in 'S' trim and 95hp guise you reach the T-Cross SE which at £19,555 with 115hp engine and six-speed manual gearbox is expected to be the best seller.

The range tops out at £25,055 for an R-Line with the more powerful engine and auto gears and there's a 250 cars-only special T-Cross First Edition at £23,155 for quick off the mark buyers.

Front assist radar sensor controlled distance monitoring and lane assist are all included as standard on the T-Cross, along with an eight inch colour touchscreen infotainment system. So too are DAB radio, air conditioning, electrically heated and adjusted door mirrors, alloy wheels and adjustable lumbar support for both front seats.

Move to SEL trim and you'll find LED lights with auto dip, climate control, parking sensors and navigation system while the R-Line adds bigger still (18ins) alloys and a bigger display screen, along with styling touches like different bumpers and black rear roof spoiler on the outside and different cloth trim, roof lining and carpet mats on the inside, along with alloy-look pedals and paddle shift on the steering wheel for auto DSG versions.

Step into any of the new cars and you'll discover a cabin that exudes the rigorously logical thinking that makes any VW Group car as instinctive to operate from the get-go as anything on offer from a multiplicity of rivals.

That means crisply clear dials and a dashboard retaining just enough physical knobs and buttons to make regular tasks like adjusting the heating and radio easier than prodding a glass screen.

You'll also discover a fine sense of a well fitted interior but with enough knuckle-rasping plastic to make dearer models feel a bit ordinary and built down to a price.

No complaints about the way the newcomer drives though. All of them have a nicely judged ride that never strays too close to energetically firm, while the distant and endearing thrum of a three-cylinder engine makes this little machine feel plenty lively enough with either power output at your command.

You might well find five forward gears are enough (so take the 95hp) but the six-speed manual change and seven-speed auto are tempting choices if your budget stretches a bit further. 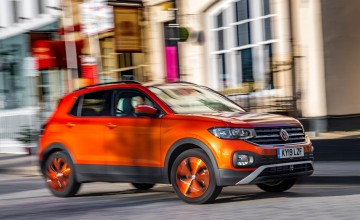 VOLKSWAGEN is the world's top selling marque. Last year it beat all comers and...