By Ian Donaldson on 2019-05-20 - Ian estimates he has driven more than 6,000 cars (so far) in a road testing career that's taken him around the world. He has spent several years as a full-time staff motoring editor and is now a busy freelance journalist

IS Mazda being just a little brave with its new and commercially important family hatchback?

Or utterly clear sighted, concentrating on what really sells a car, not what people think is supposed to work the retail magic these days.

So, this latest version of the Mazda3 concentrates on looks and petrol power, pretty much. With pretty an important word.

There's a gentle mention of battery assistance this time but this potential big seller aims to provide a fine looking car (who buys an ugly one?) and a conventional, but thoroughly modern, petrol engine with the promise of economy.

More tech is on the way this autumn (read down for details) but what we have for the moment is perhaps the sharpest suited family car in its price range - and one that drives well enough to challenge for class honours.

Which means, you might think, that this newcomer is doing just fine with only the gentlest of electrical assistance. You can have one for Â£20,595 (or a diesel for up to Â£1,800 more) and it feels like a bargain after an enthusiastic drive on the car's press launch on some superb Scottish roads.

So, some details. This Focus rival arrives as a five-door hatchback with a slightly more sober suited four-door saloon waiting for an October reveal.

That month will be a busy one for Mazda, which is planning an industry-leading addition to its engine line up at the same time with the introduction of a Skyactiv-G petrol unit that can act like a diesel, igniting the charge in its four cylinders by hugely squeezing the mixture instead of firing off a spark plug. Claimed benefits are very usefully improved pulling power and economy.

Until then, the most economical new Mazda3 has a 1.8 litre diesel engine, although with most of the new cars going to private buyers, who don't do galactic business mileages, sales will be dwarfed by 2.0 litre petrol models.

The petrol version can now cut out a couple of cylinders under light load and has a (very) mild hybrid system that stores charge in a small extra battery and releases it to help the petrol engine out when this will improve economy.

Close the bonnet and slip into the cabin of the newcomer and you'll notice a lot of soft touch finishes on dash and doors, giving an immediate feeling that here is a car with more than a touch of class.

Then, with typical Mazda emphasis, you spot controls and dials set out with maximum clarity; great for a driver's ease of use, if a little on the buttoned down side. I'll take the Mazda mixture with gratitude.

The only obvious demerit is a sat nav screen much wider than it is deep, meaning you see miles of (pointless) countryside each side of the road you're taking but precious little of the road itself ahead.

The boot will take 351 litres of luggage, loaded over a prominent lip but easily expanded by flattening the split rear seat. Rear seat legroom is similarly non contentious.

Point either engine at a demanding stretch of road and the car impresses with a fine balance between ride and enthusiasm to tackle a corner. The diesel's extra front end weight dampens reactions a bit but the petrol version puts the car immediately up against the best.

The 120 petrol powered horses on tap are enough to move the car along with conviction (and show a neat 44.4mpg at journey's end with the diesel on 50mpg) but the car is good enough to have you wishing for more. Fingers crossed for wish fulfilment in the months ahead.

There is an automatic gearbox on offer with either engine for around an extra £1,300 but in typical Mazda style the six-speed manual change is so positively sweet it's a joy to flick between ratios. A light clutch completes the case for DIY changing.

Every new Mazda3, even the entry level car, has a windscreen projecting colour head-up display with traffic sign recognition, radar cruise control and LED headlights across the range. That is going to make some rival manufacturers sit up and take notice.

The GT Sport spec sees the introduction of black leather seats with power adjustment, a heated steering wheel and Bose audio, while the range-topping GT Sport Tech features a suite of additional active safety equipment, including a 360 degreecamera and driver attention alert with interior camera that senses if you're losing concentration by your eye blinking rate and warns of impending drowsiness.

No chance of that with the sun shining on a winding Scottish road and a new Mazda3 to punt along it. 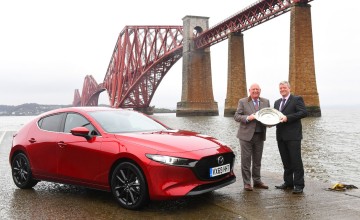 YOU'LL search in vain for a diesel version of the latest Mazda3, even though...