By David Whinyates on 2019-05-29 - David is one of the UK’s most experienced motoring writers and was instrumental in setting up the Driving Force syndication service for Britain’s biggest regional newspaper group. Former Chief Motoring Editor of Trinity Mirror Regionals, he is Driving Force’s Consultant Motoring Editor and a director of Driving Force Media Ltd. 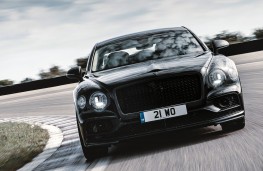 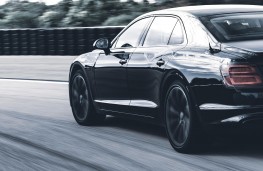 A BRAND-new Bentley Flying Spur is on the way - and this third-generation of the iconic luxury limo promises to be the most agile and dynamic Bentley saloon to date.

It will be the first-ever Bentley to feature all-wheel steering which promises to enhance both high speed stability and agility around town. During high-speed manoeuvres, the electronic system steers the rear wheels in the same direction as the front, making overtaking and lane-changes more assured, says the company.

The latest Flying Spur will be officially unveiled to the world on Tuesday, June 11 but in the meantime, these pictures show the latest model undergoing final prototype testing.

Bentley says that the new Spur is a ground up development owing only its historic name to the second-generation model although, like its predecessors, it will have all-wheel-drive, albeit with a new system which only provides drive to the back wheels in normal conditions with four-wheel-drive kicking in automatically if conditions demand.

Also new to the Flying Spur will be Bentley's dynamic ride system which changes suspension stiffness on demand to combat cornering forces and minimise body roll.

In the year in which Bentley celebrates its 100th anniversary, the Crewe-based company says its' intention is to create the world's best luxury Grand Touring sedan "that pushes the boundaries of both technology and craftsmanship to deliver segment-defining levels of performance and refinement."